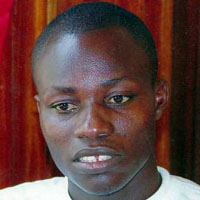 What is your vision of a world that works for everyone?
My visions of the world that can work for everyone are:
* When the human being is place as the centre value and concern;
* Recognition of personal and cultural diversity;
* Affirmation of the equality of all human being;
* Development of knowledge beyond what is considered absolute truth;
* Affirmation of the liberty of ideas and beliefs;
* Rejection of violence and discrimination.

2. Economic violence: This occur when brother become prey of each other because of money. This is money is place as a value above the human being. We experience the economic violence as the world wealth is control by 20% while 80% are living in abject poverty.

How do you feel these problems could best be solved?
The problem stated above can be solve through “only inner faith and inner meditation can end the violence in you, in others , and in the world around you. All the other doors are false and do not lead away from violence. There are no politics that can solve this mad urge for violence. There is no political party or movement on the planet that can end the violence. The repudiation of all form of violence, understanding this to mean not only physical violence, racial violence, religious violence and moral and psychological violence, daily occurrence which entrenched in all region of the planet: These proposals of considering the human being as the central value, of promoting equality of opportunity for all, of recognizing diversity and opposing all discrimination, of fighting against all form of violence, will characterize the think ing action in the most general aspect”.

All development programs should come from all and for all. The key is the non violence life style in all human activities.

Profile
My name is Mustapha Klah born of lalehun village Luawa Chiefdom Kailahun District Eastern Region in Sierra Leone. I was born on the 15october 1970 and grow up in another village called mobia. I came from a polygamous home. My father had three wives with fourteen children .My mother had four children for my father and I am the third child to my mother. I started primary school education in district Education Council primary school Lalehun from 1979 to 1984 school year and proceed to the national secondary school in kailahun from 1985 to 1989 school year. I continue to Government Technical Institute, Kiss Dock Yard Free town for certificate in business study for one academic year 2001 to 2002. I am personal interested in working with grass root people or rural people. My soul fee good in working with people that need help in an isolated community. I gain experience in working with vulnerable refugee in Liberia during the civil conflict in Sierra Leone. I work for Family Empowerment Programmer Liberia during my refugee and serve in the position as field monitor charge with the responsibility:

Upon my return back to Sierra Leone from refuge in Liberia I found a community Base organization (CBO) since 2004 until now. I am the coordinator of the organization and initiate new project of farming for rural communities which is bee keeping project and some rural community are generating income from this project. The Organization is called Humanist Action for Grass root Development Initiative Sierra Leone (HAGDI-SL).I was invited to participate in a workshop in Liberia by Swiss AfroAid for two weeks.I also travel to Senegal to participate in the first Africa humanist Forum in Dakar for one week. I was invited to participate in a workshop in Accra Ghana for one week.I travel to Nairobi Kenya for the second humanist forum that lasted for one week. I have travel in five Africa countries which I gain a lot of experience from group interchange and personal interchange. From discussion with a friend from North Africa during the second humanist forum that took place in Nairobi Kenya. Direct me and guide me to participate in the International Institute for Global Leadership.

Best book(s) that I love most is the book that teaches non violence as a way forward for human being. I love the book collected work of Silo. I love Nigeria movies because it teacher me the secrete deed of Africa culture and the way African reacted to issue.