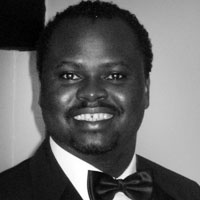 What is your vision of a world that works for everyone?
A place where everyone respects everyone else with emphasis focused on human beings and not systems and processes to simply amass a fortune in material goods. Where the values are based on principles and not greed. A place where all men are brothers and all women sisters. A place where creative thinking is valued as part of the culture. A place where no one goes hungry or unclothed or without shelter and access to information.

What do you see as the most pressing problems facing the world today?
Appreciation of Religion and Spirituality and the deeper understanding of the difference between Tolerance and Acceptance

How do you feel these problems could best be solved?
All religions began as a philosophy espoused by one of the Great Masters. I believe there have been many such Masters throughout history, Jesus, Gautama (Buddha) and Mohammed being the three foremost among them

What I believed happened is that men took these philosophies, applied lateral thinking to them in order to establish organizations that would spread the teachings and, at the same time, provide a medium of control.

Spirituality, on the other hand, is totally inclusive. Whereas a religion may espouse tolerance, there is actually very little evidence of it when it comes to dealing with people who are not willing to accept all tenets of their particular belief system. Spirituality is not about tolerance. Tolerance means I accept you in spite of our differences. Spirituality is about acceptance. I accept you because of our differences. There is a huge difference. Spirituality embraces differences and diversity, seeing the value of including other people’s perceptions in order that we may learn from each other’s knowledge and experiences, whereas religion seeks to eradicate difference and diversity. Linear thinking always leads to eventual and inevitable conflict, whereas spirituality, being non- linear, eliminates the need for conflict.

Profile
Samuel. N. O. Jacobs-Abbey is a Conflict Analyst and a Director at the International Centre for Conflict and Human Rights Analysis (ICCHRA).

He has a background in International Humanitarian Law with indebt knowledge and extensive study into Conflict Management and Peace building Processing. He became involved in several international projects from which he learnt firsthand that other cultures also struggle with how best to resolve differences and conflict as a mutually beneficial way. After much experience in his career as a conflict Analyst, He served with the United Nations mission as a volunteer to several Countries and then worked with the West Africa Youth Network as a volunteer liaison officer to Economic Community of West African States (ECOWAS) and then worked several years as a peace trainer, conflict analyst, human rights activist, social entrepreneur and social change activist in Africa, Europe, Asia, Middle East, Far East, North and South America

In August 2005 he was made an Honorary Peace Ambassador by the Apeadu Peace Centre at a ceremony witnessed by Audrey Kitagawa, Special Representative of the UN Secretary General on Children associated with armed conflict (www.children-of-the-earth.org)

Professionally he has academic background and training at both national and international field. His background is on Conflict Management and Peace-building from The Network University in The Netherlands, and also attended University of Ghana where he obtain a bachelor of Arts in Political Science with Sociology and Graduate School of Management where he attained various certifications in his field of studies. He is a product and alumina of University of Connecticut Institute of Comparative Human Rights Studies.

In 2007, He was awarded the International Human Rights Hero by Artist for Human Rights at a ceremony held in Los Angeles, which was witness, by high profile United Nations Staffs.

Mr. Jacobs-Abbey also doubles as the Programs Director for Sub-Saharan Africa for Youth for Human Rights International; a California based International NGO working to promote the Universal Declaration on Human Rights

He is married to a lovely Naa Kordee Jacobs-Abbey, (Mrs.)

As A Man Thinketh
Jonathan Livingston Seagull
The Magic of Thinking Big
Change Your Mind And Change Your Life
Success Through Positive Mental Attitude
Real Magic by Wayne W. Dyer
Giant Steps, By Anthony Robbins
Love Is Letting Go of Fear
Think And Grow Rich by Napoleon Hill
Wisdom of The Heart: Inspiration For A Life Worth Living – By Alan Cohen
A Gift of Wings
The Magic Of Thinking Success
Pulling Your Own Strings
Unconditional Life
Awaken The Giant Within
Pulling Your Own Strings
Unconditional Life
Long Walk to Freedom- The Autobiography of Nelson Mandela
The Story of My Experiment With Truth – The Autobiography of Mahatma Gandhi
Non-Violent Communication: A Language Of Life
Essential Steps To Conflict Resolution
Getting To Resolution-Turning Conflict Into Collaboration
The Mediator’s Handbook
Peace Is The Way
Walking through Fire – The Life Of Nawal El Saadawi
The God Code
Getting To Resolution – Turning Conflict Into Collaboration
The Mediator’s Handbook By Jennifer E Beer With Eileen Stief
Peace Is The Way- By Deepak Chopra
Walking through Fire – The Life of Nawal El Saadawi
The Leadership Pill – The Missing Ingredient In Motivating People Today
The Power Of Failure – 27 Ways To Turn Life’s Setbacks Into Success
How To Make Collaboration Work By David Straus
The Spirit of Intimacy
Sitting In The Fire
The Celestine Vision
The Silence Of The Heart
Conversations With God
The Nine Steps To Financial Freedom
Falling In Love: Why We Choose The Lovers We Choose