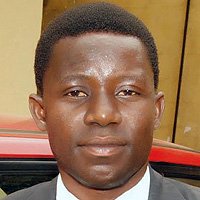 • Nurturing pupils from primary school to secondary, and to university.
• To build ‘losthoreif city’ fully residential for these children and their teachers\lecturers.
• To train and nurture these children to becoming world changers and generational leaders.
• To shelter, cater for the emotional, spiritual, physical and intellectual needs of these children.
• To have all our aims and objectives accomplished and catered for free of charge by a private body.

I am already partnering with a group of people who has like-mind, with whom I can bring this vision come true. An adage says; “a tree does not make a forest”. This group of partners/members is known as: HOT EYE INITIATIVE GROUP OF PEOPLE.
What do you see as the most pressing problems facing the world today?

The most pressing problem facing the world today is leadership factor. A leader is the one who guides, one who directs, and show the way for others to follow; in order to achieve a set goal or vision. The ability of a leader will determine what is produced and accomplished through her given followers.

I have heard of several cases whereby the people in the position of¬ authority are continuously instigating the development of nuclear weapon; what do they want to use those weapons of destructions to do? Could it be to destroy themselves or their citizens? Is it to write-off another country that does not support their opinion or decree? All and many more of questions like this always pops-up on my mind.

Of which, I strongly believe it is not good enough to use guns and bombs to dictate, because intelligent people should discuss matters. Meanwhile, inappropriate leadership is highly responsible for wrong decisions and opinions that were been carried out by the followers of such people in the position of authority

The fear of being responsible keeps people to avoiding leadership, and to just seek after position. Of which, a true leader will accept responsibility and lead people in the order of goals and vision, but not to seek after titles for the sake of recognition.

Leaders are people who know where they are going, and carry other people along; these leaders are full of vision and they get others involved in fulfilling it. A true leader is not excited about being it, but where they are leading the people.

How do you feel these problems could best be solved?
The way I feel this lack of appropriate leadership could best be solved, is by getting empowerment through education for leadership.
Having engaged certain group of people to undergo International Institute for Global Leadership, and advised them to be a graduate in it, this problem can be challenged.

And with HOT EYE INITIATIVE GROUP OF PEOPLE, we have been able to map-out a strategy that works for everyone who is ready for a change that we need and desire. We have developed a subject called, Leadership Development Studies (LEDS).

This is a curriculum that is well fashioned for both junior and senior secondary school. In this curriculum, we have been able to simplify the word LEADERSHIP in order to inculcate leadership ability into the minds of up-coming generation. This subject has been successfully mapped-out with the help of expertise who have put us through the process.

We thank God almighty because Leadership Development Study (LEDS) is a working idea already. This subject have been accepted and thought in Excellers’ International School in Ibadan, Oyo State, Nigeria.

It is high time that people seek for position of authority in order to render services, and to bring their followers in any given career to a common goal in benefit of all and sundry. I believe it is only those who have been educated (empowered) for leadership that can function very well as the leading leader.

Obviously, we have gone through bad government, we have had wicked people in our position of authority; despite all this we survived. And survival simply means there is hope. For any time there is a survival it is a good signification that there is hope for the future. I believe in a change that we need, I believe in God.

Profile
I am Oyewumi Olaoluwa Samuel. I am well known as Olaolu Oye in my community, on my facebook, by my friends and loved ones. I was born on October 21st 1982, at ST MARY’S HOSPITAL Eleta in Ibadan, Oyo State, Nigeria.
I am a male, and I speak Yoruba language and English language fluently. I am born into a Christian family by Mr. Lawrence Oyewumi, and Mrs. Alice Olufemi Oyewumi.

I attended Public Day Primary School in 1990 to 1995, and I had very good remarks on the works of the pupils in the school subjects. I attended Urban Day Grammar School in the year 1996 to 2002, and I passed out very well in my senior school examination with five (5) A level credits, and one (1) distinction in Literature in English. In between the year 2002 to 2005, I was able to acquire knowledge in Industrial and Commercial Photograph. With certificate presented by Dr Omojola, on 23rd October 2005. I had my National Diploma in Mass Communication, in the year 2006 to 2008 at Akwa Ibom State Polytechnic, Ikot Osurua.

I am presently single, and self-employed in the Art of Photography. I am also actively partnering with a group of people known as HOT EYE INITIATIVE GROUP OF PEOPLE; who are fully involved in Leadership Development Study Programme.

It is of my plan to press further in my education. As regard, International Institute for Global Leadership (IIGL), and also to hold degree in BSC certificate.
During and after my days in the institution, I was actively involved with a youth empowerment group known as; Victorious Evangelical Ministry, up-to the year 2009. This group was targeted at updating the involved youth on different workshops. And I was able to gain knowledge on GSM engineering (repair), which I practiced for some period of years.

My activities are; reading, computer operation, table tennis, Bible study, singing and communicating, and many more. I like the following musician and their music; Joe praise, Ron Kenoly, Don Moen, Sinach, Kirk Franklin, and Pastor Chris (moment of worship). I am interested in the following; seminars, healing ministrations, sharing revelation, giving, speaking in tongues, and gospel with power. My favorite television shows are; who wants to be a millionaire by Mr. Frank, and breaking news. My favorite meals are; beans, wheat, vegetables and fruit. My best movies are; 24hrs by Jack Bauer, Matrix, and Fighting temptation.

I have attended series of seminars. One of many that I attended is PROJECT GET RICH SEMINAR, in which we had speakers that have experienced international relation. I have leadership experience as the head and coordinator of evangelical group in my secondary school fellowship. I was nominated and functioned as the executive leader of Victorious Evangelical Ministry. I have been a group leader for years in my church, and actively functioned as an outreach fellowship coordinator for under the period of one year. I have also trained four apprentices successfully in my career workshop. While I have two of my apprentices operating their own business, and having their own workshops. I am presently a leader, and the executive partner for budget and payment of HOT EYE INITIATIVE GROUP OF PEOPLE.

Among series of books that I have read are: Towards Mental Exploit by David O. Oyedepo, The Pursuit of Purpose by A.W. Tozer, Rich Dad Poor Dad by Robert T. Kiyosaki, with Sharon Letcher, Be a People Person by John C. Maxwell, The Purpose Driven Life by Rick Warren, The Seven Spirit of God by Chris Oyakhilome, and many more.