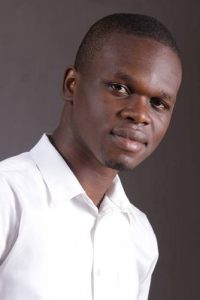 My vision of the World that works for everyone is that which every human being irrespective of religion, gender, tribe, association, affiliation or view is first respected and accepted that he/she has certain fundamental human rights which should not be denied. I strongly believe that Tolerance holds the key to a world that works. When people are tolerated and respected, they tend to reciprocate the same way.

I represent a vibrant young African with huge interest in Democracy and Good Governance. Africa is a land blessed with abundant opportunities like countless natural resources but has been mismanaged mostly by those in leadership position. So using Africa as a case study, my own opinion is that Leadership is the major issue facing the world today. In Africa today and some parts of the world, leaders (Rulers) in collaboration with few elite loot and plunder resources meant for the citizens. This bad trend leads to unemployment, kidnapping, high cost of basics needs (food shortage) and in some cases leads to chaos (Zimbabwe, Somalia etc). When the issue of bad leadership is solved, the world will be much safer to live in.

In 2011, I conducted a project for UNFPA (Pakistan), Youth Action Coalition (YAC) and Youth Dividend on the Electoral Enlightenment for the 2011 Nigeria general election. In the project proposal, I highlighted that for us (African) to join other developed Nations; we need to solve our Leadership challenge. And the best way to solve this is to elect credible, honest and people oriented leaders during elections. Massive enlightenment campaigns should be carried out to enlighten the citizens especially youths which forms 60-70% of the populations on the important of electing credible leaders during elections since it affects all spheres of our daily lives. Its only when this is done that real development, democracy and good governance can occur.

I grew up listening to local indigenous music and other music from East Africa (mostly known as Bongo). My Late Father will always play this music from night to early hours of the morning and somewhere along the lyrics of the music, my Father (a business man) will always regale us with tales of his many victorious conquests with evil spirits “mammi water” on his long travels to different villages in search of greener pastures. My growing up was fun and interesting because I had three siblings (a boy and two girls) to play with most of the times. We will come out to play when the moon is out at night and will equally dance outside when it rains. These little things helped shaped my child hood days. During the child hood days, I had wanted to be a military man because of how neat and disciplined they are especially during parades.

Having been told of how good living condition was during our independent days (1954-1970) and how bad things are now due to bad leadership and corruption, I decided to develop interest in Democracy and Good Governance and how leadership developments can be increased and cultivated in our teeming young populace. I have attended various workshops and leadership training all geared towards equipping me. Chief amongst the training was Desplay Africa organized by Youngstars foundation Nigeria) with funding from NED (USA) and National Tolerance Academy organized by Champions of the Society with funding from UNOAC and many other ones. In those programs, I was exposed to the effects of Leadership on the governed. How good leaders can transform nations and how bad leaders can as well throw nations into chaos. And that the easiest way of reducing corruption, bad leadership, embezzlement is to vote and elect credible leaders during elections. This led me to develop a project on “Electoral Education and Enlightenment for the 2011 Nigerian General Election” which was funded by United Nations Population Fund (UNFPA – Pakistan), Youth Action Coalition (YAC – Italy) and Youthdividend (Pakistan). The project increased the number of young voters and was instrumental in electing few credible leaders we have around the Eastern part of Nigeria today.
My goal in life is to be an instrument by which young people will be equipped and empowered to make right choices that play a key role in their daily lives especially leadership choices. I want to create a society where young people engage policy makers and become part of the policy formulations and implementation. A society where young people engage leaders through constructive criticism, dialogue, suggestions and monitor and evaluate key government policies to its full implementation. I recently volunteered to work with Ugreen Foundation (www.ugreenfoundation.org) where all my activities and daily interactions are towards youth’s empowerment. We organize seminar, leadership and writing workshops for young people. Presently, we are working on a project titled “Uzoigwe Elechi Humanity Project” which is an essay contest that seeks to reward the winner with $1000 and all expense paid trip to Abakaliki (South eastern Nigeria) to interact with young people.

I studied Applied Biology (B.Sc) from Ebonyi State University, Abakaliki and plan to study Safety and health environment (Public Health) for my Masters. When not working, I relax by watching movies (24) and documentary channels like discovery and national geographic. My music is determine by the mood am in, but I love Nigerian music a lot.