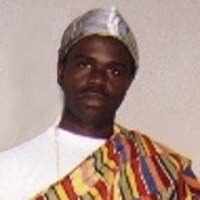 How do you feel these problems could best be solved? Human beings need to develop their inner vital force not against someone else but for their human revolution. If we agree that we are authors and actors of destiny, the solution of any problem belongs to our own human revolution.

I am Cameroonian by birth and an alumnus of the Jesuit fathers. After high school Degree G3 (Marketing), I obtained a college certificate for Business Management with option in Marketing at the Information Technology Institute (ITI), Douala, Cameroon. Other professional certificates earned include Computer base Data Management; Treatment and transmission of information; Leadership; Factory Management; Mining and Petroleum Economy; Proventive Peacebuilding, Conflict Transformation and non-violent conflict resolution obtained in Cameroon, Côte d’Ivoire, South Africa, Ghana and Benin. Currently, I am in my level 3 studies with the International Institute for Global Leadership (IIGL), Asheville, North Carolina, USA. I am also a candidate for a Public service MBA studies at the International Development Department, University of Birmingham, United Kingdom.

I grew up in a country (Cameroon) where the classical education system was under turbulence. I then decided to put emphasis in professional training while working to improve my effectiveness to contribute to the development of my country and Africa and a peaceful world. This is still my overall objective. My constant quest is to become a role model for the African youth and symbol of struggle, commitment and determination for a new world leadership and the change in my country Cameroon.

I joined IIGL because I felt comfortable with the concept that matches my vision and objective. I am very proud to participate in the program as it strengthens my capacity and improve my leadership ability. Now I wish to serve the Institute by contributing to the development of the curriculum, the drawing up of a francophone branch and motivate French speaking students to join the program.

I am holding various college and professional certificates with sound experience in fields as Conflict management, and leadership. I have been nominated as laureate by the international Committee of Century Quality Award, Category gold (Geneva, 2003) and was awarded the NEPAD Award for Individual Personal Contribution (Johannesburg, 2004).

I accumulated five year professional experience in the private sector in Cameroon and Cote díIvoire in the fields of Communication, International trading, Business Management and Mining. I occupied the positions of Sales Manager; Director of Strategy and Development; and CEO before joining the civil society in 2000 as Executive Secretary/Director of the NGO POSITIVE AFRICA. In July, 2003, I was appointed regional coordinator of the NEPAD (New partnership for Africa’s Development) for the Central Africa civil society. NEPAD is the African Union Development programme. I also served as National coordinator of WANEP (West Africa Network for Peacebuilding) in Cote díIvoire from January, 2004 to June 2005.

In my current position as Executive Director of Positive Africa, as assignments, I am policy maker for strategies of intervention for peace building, introduction of the organisation and networks at national, regional and international levels. I lead the organizationís team for the African Union supportive consultation programme. Thus, am conducting first and second standard diplomacy for early warning, Risk Assessment, Good Governance and Human rights. Also coordinate the operations of lobbying and Advocacy to promote the public image of Africa and the poverty alleviation’s programme. Responsible for fund raising, budget
management, personnel management, editing and editorial management and conference management. Direct a staff of twelve people and about twelve national coordinators.

My experience includes, inter alia, For my job experience, I am usually referring to Abraham Lincoln’s (1809-1865) life. This is to say that I started work very earlier : Representative and Assistant of Consultants for Bartemee’s International Consulting Group, based at Douala, Cameroon (1993-1995); Sales Representative for Africa Trading International, based in Yaounde, Cameroon (1995); Assistant Editor and Marketing Adviser of the General Manager of Generation Group Inc., a multimedia Communication Group based at Levallois-Perret, France (1998-1999); Marketing Manager for Isic International, based in Abidjan, Cote díIvoire (August 1999 – May 2001); Strategy and Administration Manager for Isic International (June 2001 – December 2001); Founder and Chief Executive officer of Ronyo Investments International (1999-2001); Permanent secretary for Panafrican Union of Jesuit Alumni constituent congress (1994); Staff member for Panafrican Union of Jesuit Alumni constituent congress (1995); Project Manager for the conception of Ronyo Investments International (1998); Project Manager for the Drawing up of Positive Africa (1999); Lobbying journalist for the National Broadcasting Radio Cote d’ Ivoire FM 98 (2001); Organizing Committee member for the International forum of UNESCO on “Cities and cross-culture dialogue” (2001) and Secretary for the organizing committee of the International forum of Civil society and NGOs on African Renaissance.

As A Man Thinketh
Jonathan Livingston Seagull
Awaken The Giant Within
Pulling Your Own Strings
Real Magic- Creating Miracles in Every Day Life
Unconditional Life
Change Your Mind, Change Your Life
Success Through a Positive Mental Attitude
The Magic Of Thinking Big
Love Is Letting Go Of Fear
The Spontaneous Fulfillment of Desire
Unlimited Power
Giant Steps
Key To Success: The 17 Principles Of Personal Achievement
The Law of Success in Sixteen Lessons, Vol. 1 (Lessons 1-7)
The Law of Success in Sixteen Lessons, Vol. 2 (Lessons 8-16)
The Power of Failure
What To Say When You Talk To Your Self
Build To Last: Successful Habits of Visionary Companies
Nonviolent Communication – A language of Life
The Power Of Intention
Becoming A Coaching Leader: The Proven Strategy for Building a Team of Champions
The Money Changers
True Prosperity – How to Have Everything
Money Changers
Inside The Economists’s Mind