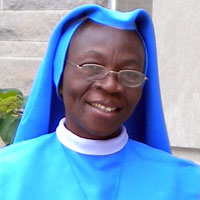 Why would you like to participate in this study program?
According Alvin Toffler, “knowledge is not a critical factor of production- not just a factor of production”. This presupposes that one must acquaint oneself with knowledge in other to fit into this contemporary society of ours. The search for knowledge is very vital in meeting the demands of our global economy and to be able to solve problems we encounter everyday in our homes, offices, churches, to mention but a few.

Please describe your vision of a world that works for everyone.
My vision of the world that works for everyone is seeing an upward and sustainable development of leadership skills that will equip leaders in this technological diffusion and advancement with the requisite knowledge, skills, expertise and experience to become total quality managers and leaders at their various offices and departments. This world is such that due to technological advancement, products and service creation requires unique skills and human resource in other to be in the competition or else one is bound to face out. Knowledge as a leader must be used to create competitive advantage to outperform our competitors in the same industry.

What do you see as the most pressing problems facing the world today?
The most pressing problem of the world from my own perspective is over population. This so because the standard of living per individual and rate of GDP growth per an economy most especially Asia and Africa does not commensurate. People are suffering and have been denied the opportunity of having access to portable water, well-equipped health facilities, effective and efficient structured educational system, good roads and above all electricity which is backbone of the economy. Malaria epidemic, typhoid, tuberculosis, measles and guinea-worm are not effectively handled and millions of cedis are spent almost every time in combating this social canker. The rate of death recorded every year as a result of the aforementioned diseases is so alarming that special attention should be paid to this effect, if not totally eradicated can be minimized to the beeriest minimum.

How do you feel these problems could best be solved?
Over population can be solved if the world at large emulates and incorporate the ideology of China- one parent one child. Comparing birth rate and death rate, creates large margin and therefore the idea of solving this issue becomes unbearable and cumbersome in that, it is not visible and conceivable. However, we should note that anything conceivable is worth achievable. The Continents of Asia and Africa who are over- populated need to implement and efficiently mentor the principle and philosophy of China – embracing this idea will go in the long run to curtail the issue of over-population. At the long run, the standard of living per individual and the rate of GDP growth per economy will be seen as superb.

Profile
Sr. M. Concepta Mensah is the third born of six girls and hails from Abuakwa in the Ashanti Region of Ghana a typical Akan by tribe. I had my primary education at Roman Girl’s school now, Saint Benedette Girls Primary School in Kumasi and attended Boa Amponsem Secondary School at Dunkwa on –Offin. While in the secondary school, I was an active member in the debating club, drama group and an athlete. I ran for my school on many occasions and won trophies during inter houses and inter schools athletic competition. By dint of hard work, I served as an assistant girls’ prefect. The work I did so well with all my ability and served the students with joy though not so easy. I travelled to Nigeria to pursue my religious education. Later on I was trained as a professional teacher at Loretto Teacher Training College at Adazi in Anambra State, Onitsha. After a successful completion, I taught in both public and private schools and later returned to Ghana; there I continued my education at the University of Education, Kumasi Campus.Sr Concepta has a flair for having young people grow up and has also the knack of all it takes to catch them young for Christ; deep within me is an insatiable desire to make God much known and loved. I am particularly interested in the formation of the little ones and wish to see each and everyone become a respectable and responsible adult in future and be able to face the realities of life squarely wherever one may find oneself in the world. I am personally interested in reading and writing and loves travelling around thereby learning and acquiring more knowledge. So far I have visited about nine states in United States of America, United Kingdom, Amsterdam, Italy and France for meetings, visits and on pilgrimage respectively. I have served as a secretary to many religious gatherings and on different committees till date. I was once a Vice President of Women Religious group for four years. My duty as an administrator has exposed me to various places for meetings and has had the opportunity of playing a leadership role in many occasions. To me the term leadership refers to the ability of a person (s) to guide, direct and influence other people. Leadership is a sine qua non for the smooth running, growth and development of any grouping; and the style of leadership one employs will greatly depend on his / her philosophy, personality and experience. It is my duty as a leader to demonstrate a high sense of intellectual prowess, be courageous and confident. This will help me to impact good ethical conduct to all those I come in contact with. In fact, it is my duty and challenge to be a role model leader who will never settle for mediocrity. This could be achieved only when I communicate effectively with everybody. Communication as we all know is a human relation skill which facilitates the transmission of information, ideas, knowledge and experience and makes possible cooperative action. It is my ultimate desire to be counted as one of the able and dynamic administrators in the world.

I firmly believe the notion which states that, any educated person who fails to study always and ahead, becomes an illiterate person and education as we are fully aware, is the key to every success. My extra curricular interest includes, listening to good music and horticulture and my philosophy in life, is to trust in the great providence of God.