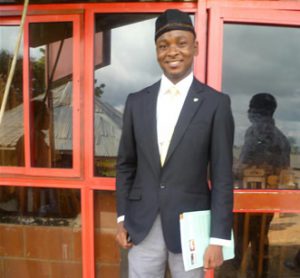 My vision is pitched on Three Pillars:

1. Sound and Compulsory Education for all Children: with this in place, every child will have the opportunity to replace a closed mind with an open one. It will shatter all intellectual despondency and create an avenue where productive thinking is the apex of all human endeavors.

2. Serene Environment: the English saying, “Neatness is beauty” can be alive in all nations. Many epidemics, especially in African countries are caused by dirty environments. With the sense of maintaining a very neat environment where grasses are truly green and streets are perfectly free from littering, humans can be proud of being an architect of beauty.

3. Maintaining the sense of orderliness, peacefulness, and excellence in our concern for human existence.

In our contemporary world, Deficits of Respect for the Prosperity of All stands as the challenge for a better standard of living for many humans. Poverty is wrongly propagated as the problem, but it is just the resultant-effect where “deficits of respect for the prosperity of all” is felt, since poverty, according to a tutored phenomenon, is a disease hyper-intentioned by men. When the prosperity of a people is despised either intellectual-wise or infrastructural-wise, surplus of disorderliness will be the order of occurrences. As individuals, few will be willing to contribute to the prosperity of a fellow or a junior, with the popular defense of limited resources; as government of nations to her peoples, insufficient funds to finance infrastructures is a common defense.

The contemporary world problem advanced is Deficits of Respect for the Prosperity of All. This prosperity will be aided under the auspices of Intellectual and Productive Development. On Intellectual Development, it is my strong believe that the first rung of the ladder to a prosperous world is sound education. This will require a compulsory primary education, and at other level of study, teachings should be engaged to providing necessary internship programs, most especially at the tertiary levels for all courses of study. This will abort the saying that, “many of our graduate are unemployable.” On Productive Development, government of nations, especially those of Africa, do complain of insufficient funds in carrying out development programs. It is true that nothing works better than work itself. The contributing factor of wealth for a country; as advanced by many political economists is to be production-oriented. The country that works best in the production of goods and services gets more money, logic not magic rules. If poor countries get to be production-oriented, imbibe diligence, and exact a global sense of exportation, and whose population balances to the share of their respective revenues, they cannot be tagged poor.

Ola Makinde is my name, and I’m a Nigerian-African. I was born without a silver spoon, but my thanks to God he sent me to a caring parent whose worth no silver could merit. With survival from teen age’s troubles, I was privileged to be schooled in one of Nigeria’s best; Obafemi Awolowo University, for a graduate course in Politics, Philosophy & Economics (B.Sc.). Prior to that, I was schooled at The Polytechnic Ibadan, where I earned a National Diploma in Business Studies.

I want it said of me that I love to hear peoples successful stories, and if possible, to be a contributing phenomenon. This made me volunteered to join some groups of service. While at the Polytechnic, I joined the National Association of Business Studies Students’ Editorial Board where I later became the Chief Editor. The Board, for the first time in many years bagged an award as The Most Colorful Editorial

Board on Campus. Also, I was a member of National Association of Ogun State Students (NAOSS), where I later became the General Secretary; also, at the level of the All Boards’ Press Council, I was inaugurated as the Protocol Officer.

At the university, I was a member of National Association of Political Science Students, where I was elected as the Assistant General Secretary. At the following executive year, I became the General Secretary. In the graduating year, I was privileged to be the coordinating Chairman for the Final Year Graduating Class of 2011. During the National Youth Service Corps Scheme, I was the Public Relations Officer for the Community Development Group I was posted to. I was again privileged to carry out a Personal Community. Development Project (PCDP) in a Community Primary School. The PCDP includes donations of two computer sets, school’s sign board, brooms, parkers, and waste bins. The gestures were appreciated by the State government, thereby decorated me with an Award of Honor. The PCDP taught me to believe in one-self and stick to a noble course even if it will not attract ovation. And, also, that no one else will best believe in your vision than yourself’.

My best movie remains “The 3 Idiots;” my best reads includes Adam Smith’s The Wealth of Nations, Lee Kuan Yew’s ‘From Third World to First, The Singapore Story: 1965-2006’, the Complete James Allen Treasury ‘Mind is the Master,’nd poverty of Nations’ by Harvard’s David Landes, ‘The Autobiography of Paddy Ashdown’, Nelson Mandela’s ‘Long Walk to Freedom’, ‘My Life’ by Bill Clinton, Barack Obama’s ‘Audacity of Hope’ and ‘Dreams from my Father’, ‘The Complete Works of William Shakespeare’, ‘Time Mastery’ by Clemens and Dalrymple, ‘My Life in Politics’ by German Chancellor Willy Brandt, ‘Ghandi, An Autobiography’, Martin Meredith’s ‘State of Africa’, ‘Drake’ by Stephen Coote, Plato’s ‘Republic’, ‘Everyone Communicates Few Connect’ by John C. Maxwell, ‘The Pro-growth Progressive’ by Gene Sperling, amongst others.

I am a writer, and I’m working on publishing my first work of 300 pages titled ‘A Call for Hero;’ I am currently writing my second book titled ‘10 Rungs of Ladder to a Lasting Leadership;’ and I am a Convener of Masses Affairs a local NGO that advocates for Sound Education, Serene Environment, and Strong Mentoring.

As A Man Thinketh
Jonathan Livingston Seagull
How to Win Friends and Influence People
Keys to Success
Psycho-Cybernetics
Success Through a Positive Mental Attitude
Giant Steps
The New Dynamics of Winning
Real Magic
Goal Setting 101
Nonviolent Communication
The Seven Habits of Highly Effective People
Goals
The Law of Attraction
Unlimited Power
Random Reminiscences Men and Events
The Autobiography of Benjamin Franklin
Theodore Roosevelt: An Autobiography
The Autobiography of Abraham Lincoln
The God Code
Churchill, the Power of Words
Development as Freedom
Margaret Thatcher: An Autobiography
The Course of my Life
Through the Years with Jimmy Carter
You Must Set Forth at Dawn
Abraham Lincoln: Complete Works (Volume 2)
Creativity Workout
The Kingdom of God is Within You
This Child Will Be Great: Autobiography of Ellen Sirleaf Johnson
Ronald Reagan: The Autobiography An American Life
War and Peace
Diplomacy
The Generalissimo and the Struggle for Modern China
Hirohito & the Making of Modern Japan
A Journey: My Political Life