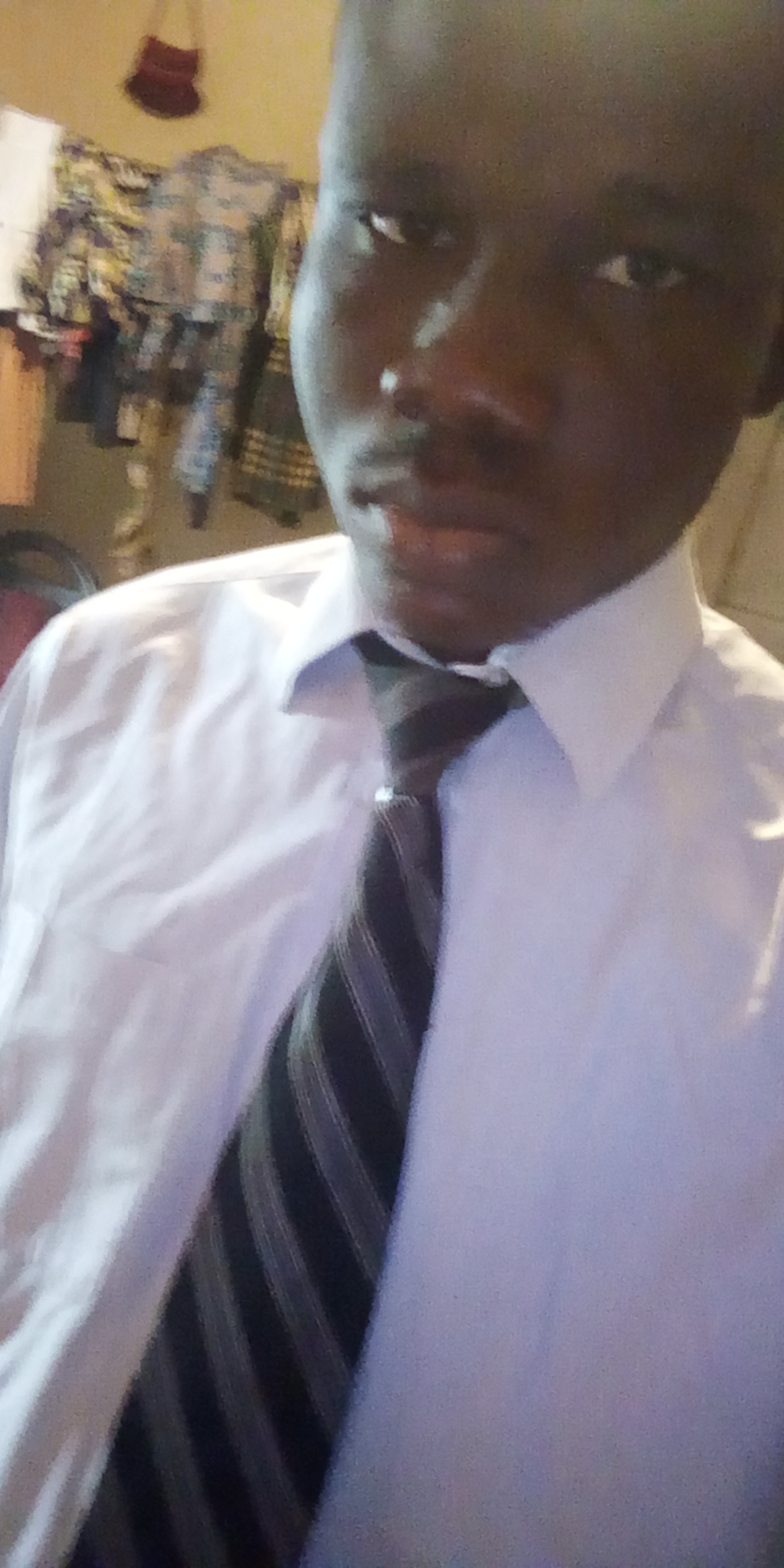 Please describe your vision of a world that works for everyone.
Talking about a world that works! Considering the fact we are in the technological advancement-cum- information era, a world that works will to a very large extent be computer and technologically based and savvy. So, vision-wise I look forward or envision a world of computer versatility on the part of children and adults alike. Considering how much of a perverse world we find ourselves, understanding the fact that the onus is on us right thinking and reputable individuals to provide a support system for the emancipation of as many as we can from the grip of perversion. In the light of understanding the state of the societal lacuna we obviously are tearing and frowning as a result of, makes a vision of a world that is leadership-training inclined one which is important to our society and is feasible and obligatory on us as burgeoning influencers to make happen. The fact that peace and unity, as very vital elements to nation building shouldn’t be toyed with or treated frivolously, it is important that one conceives a vision , just like I have conceived and foster moves towards the consolidation of peace and unity, which are products of integrity, transparency and legitimacy on the part of government.

What do you see as the most pressing problems facing the world today?
With the world comes a very considerable number of problems that plague her inhabitants. Prominent amongst the slew or plethora of problems are what I will be discussing succinctly in this column. Problems prominent amongst others are Terrorism, Maladministration and fund Misappropriation.

Starting with Terrorism, I will like to make glare a clear picture or definition of what terrorism is; Terrorism is the calculated use of violence to create a general climate of fear in a population and thereby to bring about a particular political, religious, ethno-centric dissident or ideological objective. Looking at the various forms Terrorism occurs, I will make clear the various forms or types of terrorism. Terrorism are of 5 major types which are: The New Terrorism, State Terrorism, Dissident Terrorism, Religious Terrorism, Ideological terrorism and International Tterrorism. Sub-classifications of accepted typologies include nationalist terrorism, ethno-national terrorism, and racial terrorism. The aforementioned forms of terrorism are of adverse effect to the world and are each peculiar to different parts of the world. The terrorist activities of a country in West Africa called Nigeria is basically religious and political. Secondly, we have Maladministration as a very serious problem too. What is Maladministration? Maladministration is the act or process of running a system or organization ineptly and incorrectly. Maladministration which has proven a proponent of diverse problems in the world today can simply be seen as an administration obviously detrimental to those who are lead. An administration that isn’t for the favor of the lead is faulty and unprogressive. Unprogressive in the sense that Maladministration has lead and proven to be the mother of so many problems too, example of which are; unemployment, underdevelopment, criminality and insurgency and the latter part of such administration leads people to rebellion usurpation or insurrection. Lastly, Fund misappropriation. What is fund misappropriation? In law, misappropriation may be defined as “the unauthorized, improper, or unlawful use of funds or other property for purposes other than that for which intended. Fund misappropriation is a product of Maladministration because administration talks about human and resource management, so inability to manage funds, or rightly appropriate funds is tantamount to Maladministration. Fund misappropriation has resulted in lack of infrastructures in our hospitals, schools, places of social services and that obviously poses a very big problem to the world already.

How do you feel these problems could best be solved?
Ways to tackle Terrorism are as follows; “Stepping up the exchange of information.” Criminals and terrorists often use multiple false identities to evade border guards and police. This highlights the importance of effective information sharing between the relevant authorities – law enforcement, judicial, intelligence – in the member states. In 2018 new rules to strengthen the Schengen information system (SIS) were agreed, introducing new types of alerts for cases related to terrorist activities. The database allows police and border guards to enter and consult alerts on wanted or missing persons and lost or stolen property. To use existing and future databases in a more intelligent and targeted way, the EU information systems that help manage borders, security and migration should enable data exchange. This new interoperability should become operational after 2023 and provide a single interface for searches, as well as a biometric matching service to facilitate identification. Europol, the EU police agency, supports the exchange of information between national police authorities. In May 2016 MEPs agreed to give more powers to Europol to step up the fight against terrorism as well as to set up specialized units such as the European counter terrorism centre, which was launched on January 25, 2016. Next, reducing access to dangerous weapons. The EU does everything possible to prevent dangerous weapons coming into the hands of the wrong people. The revised firearms directive closes the legal loopholes which allowed terrorists to use reconverted weapons for example in the Paris 2015 attacks. It requires EU countries to have a proper monitoring system while keeping exceptions for hunters, museums and collectors. The vast majority of terrorist attacks in the EU were perpetrated using home-made bombs. It will be harder for terrorists to get hold of the ingredients needed to build explosives thanks to stricter rules agreed by Parliament in April 2019. Excerpts from EU security measures: On Maladministration ways to curbing or tackling Maladministration.. Power of the people: Create pathways that give citizens relevant tools to engage and participate in their governments identify priorities, problems and find solutions. Build capacity for those who need it most: Countries that suffer from chronic fragility, conflict and violence are often the ones that have the fewest internal resources to combat corruption and Maladministration. Identify ways to leverage international resources to support and sustain good governance just like the UN and other international bodies are helping. On fund misappropriation; Ways to combating fund misappropriation are as follows: computer security check remains Paramount in dealing with issues of fund misappropriation. Proposed needs for funds should be carefully investigated and if true, it’s execution be properly monitored. A people-centered leader us also very important in a case like this as a people-centered leader will do well to work in the favor of the populace and not for selfish ends. As is also very important in curbing Maladministration; we need a form of reorientation to help us understand that selflessness, and other imbibed virtues will augur well for a free, happy and pleasant society. Orienting the populace on such matters of importance to good administration will help ensure that burgeoning leaders don\’t go astray from the course of goodliness, transparency and accountability.

Profile
I am Oghogho-Omoruyi Amadinaiyangbon, a descendant of the family of Mr. and Mrs Oghogho-Omoruyi of the Benin kingdom,Edo state, Nigeria. Religiously speaking, I am of the Christian faith, who is in accordance with Jude 3 of the holy Bible, earnestly contending for the faith which was once delivered unto the saints. In advocacy of the faith, I will love to at all times defend the founder of my faith, Jesus Christ . Solidly embedded in the Christian faith is the triune nature of the blessed Trinity , God the Father, son and holy spirit which is the foundation and emblem of Christianity. I am overly opinionated, having biblical backing when it comes to the things of the faith. I am an ardent and unrepentant follower of great men of God and personalities that have over time been of great influence to me academically, financially(with regards to financial management),spiritually and psychologically, amongst whom are: Bishop David Oyedepo, Pastor Tunde Bakare, Pastor Enoch Adejare Adeboye and Pastor Sam Adeyemi. Prominent among foreign Gospel ministers I am in love with are; Bishop T. D Jakes, Pastor Joel and Pastor Copeland. Secular influencers of so much interest to me are; Professor Wole Soyinka, who has in so many ways influenced me through his books and speeches momentarily; also amongst the list of influencers is my honorable, Dr. Charles Apoki, who has done well in a bid to making wealthy men and women of youngsters, home and abroad. I am an avid reader; one exactly who broods on the content of that which he has ingested by the virtue of his knowledge acquisition exercise. Popular amongst the authors and texts that I have patronized so far are: The Two Kinds of Life by E. W. Kenyon; Becoming a Leader by Dr. Myles Munroe, Secret to Success by Eric Thomas and lastly, How Successful People Grow, by John Maxwell. Reading has been a source of insight to a very large number of great men and women of the society who have lead good lives and replicated that in the lives of others in the same society where we find ourselves, hence my total submission and acceptance to the cliche dogma, “Readers are leaders.” In one familiarizing himself or herself with the details of who I am, one will get to understand that I am somewhat introverted and less gregarious as so many will easily find out on meeting me in person. I am a very good table tennis player, very receptive of both female and male friendship. As an aspiring academic, I am so much into all that deals with an academic institution setting and also in pursuance of my vision. I am presently undergoing a degree program in Guidance and Counseling, in the faculty of Education, University of Benin (UNIBEN), Benin City, Edo state. I am somewhat apolitical; owing to the very corrupt practices of the Nigerian government, but I am gradually reintegrating myself into the system, as I know that I only can make a change by participating in it and posing a change agent in all ramifications.