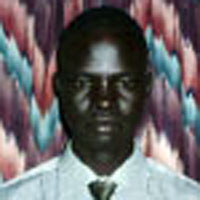 Please describe your vision of a world that works for everyone.
World that work for every one is the world where every one respects God and all his creations and follow his will in our thoughts and actions, looking at ourselves as brothers as one people and one nation, look down upon economical, educational and spiritual aspect of our life and live inter dependently without economic, social, cultural and spiritual walls build among us

What do you see as the most pressing problems facing the world today?
Corruption ,racism, wrong political Ideology, conflict and negative cultures and racism are major enemies to the unity, peace, and co-existence in the world, for corruption make it hard for us to accept others as unique and have unique ideas that we do not have and sideline them and move forward to do the jobs poorly and provides poor services to our people thus provoking resistance,disloyality, rebellion and division in our societies leaving us to the merciless civil war, economy and diseases . Ignorance and greediness are the major enemies which has not only cripple our hand and legs but blinded our minds from doing and seeing beautiful things, of course some leaders are power, wealth and pride greedy to the extend they cannot be move even if human life is being loss, the precious thing we not manufacture in our worldly factories on the other hand masses are ignorance to the extent were they are spectators of their destiny, by watching leaders destroy it and do nothing about it

How do you feel these problems could best be solved?
This problems are man made and if man has made them he also have capabilities to undo them. First of all we must avoid racism knowing that all of us irrespective of our color and race come from God and each among us has special capabilities that God has created and gifted them if we learnt about this earlier there will be no fear and envy for other peoples success instead we will assist them to do more according to the areas of specialization. Secondly leaders needs to be assist in shaping the world and we approve them whenever they made positive step toward realization of united , prosperous and democratic world and courageously condemn the one who are likely to promote the opposite

Profile
I was born on first April 1982 in Kolnyang payam , Bor South county, Jonglei state, Southern Sudan, being born during the war era, there was no choice of either going to school or not because by then we were in rebel controlled areas were education was nightmare. Thus I use to spend my earlier time helping my parent attend castles and helping them in the field during the plantings seasons, life was not good either as I saw and heard most of the peoples in the villages succumb to diseases, war injuries, hunger and thirst.

It was then that I learn about the much suffering caused by the civil war, through my observation of the few people who are working for international organizations offering relief basic services to the war affected people that I learn the different between the educated and illiterate, the educated were smart, health and were revered as they stay around the village, that gave me a desire to be educated, but to no success until 1996 when ACROSS (association of Christian Resources Organization Serving Sudan) a local NGO airlift stationeries’ from Lokichogio at Sudan – Kenya border to our village and open under trees classes.

I continue until class three but my needs were not satisfy due to unfavorable conditions in the area and from there I left for Kakuma Refugee Camp in Kenya were I continue learning until I finished high school in 2006 and left for Sudan In Sudan I was trained and recruits to work for southern Sudan Wildlife Services as sign list in charge of Warrap State, and due to in satisfy needs for learning I was released on January 2009 to come for studies in Kenya.

My vision is to be thoroughly educated to go and teaches my brothers and sisters who had not had a privilege to come to school, of cause we intellectual in Sudan needs to educates our peoples in order to realizes, peace, prosperity and rapid development of cause Sudan had fought It self all this years because of poor leadership, which incite un educated masses to kill themselves because they are manipulated or brain washed with personal and wrong ideology I believe we can manage the conflicts and war being fought in our soils if we unites against and work as team, because of our sought, cultures and religious that is why mankind is the most destructive and violent being in the world, the way we have constructs this bad I ideologies is the same way we can demolishes them and I want you and me to be the part of demolition team to create better world