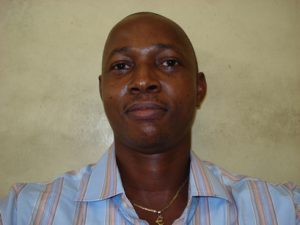 A world whereby everyone is entitled to all the basic social amenities, like good road, electricity, pipe borne water and good health facility.

The problem of the world are divergent in nature depending on the regions of the world but the most pressing problem facing the world is leadership problem as it is the core that encompasses all problem in other words all problems emerges from it , if it is gotten right a lot of solution would have been given to other problems directly or indirectly.

These problem could be solved. Anybody that wants to be a leader should first have an integrity centered on selflessness, or anybody that has be made leader must have the quality serving the people so that it would be able to know every problems and emerging ones and solve them.

I am Kingsley Iyamu born on the February 27, 1972 in Edo state to the family of Mr. and Mrs. Isaac Iyamu, who are farmers, They live in Edo state formally known as Bendel state in the former Midwestern state of Nigeria, I am from a family of nine children, five boys and four girls but two girls are late and I am the eldest in the family. I spent the early days of my life with my grandmother whom I stayed within the village called Uronigbe under Orhionmwon local government area of Edo state. My grandmother was likes me very much because my father was the only surviving son after five children who she believe died mysterious probably as a result of the witchcrafts and wickedness during their times and also strange diseases but was very young when both my paternal and maternal grandfather died in fact I can still recall a bit of the memory how loveable l was in their hands and I was six years old I attended Ologbosere primary school and from there to Niger college Benin city where I finished my secondary education in 1987/88 and got my west African examination certificate/General certificate of examination and I briefly worked in one printing company, Retinken Nigeria Limited in Benin city of Edo state as a sales representative using a motorcycle to distribute the goods assigned to me in Edo state and after two years I left there to start teaching in a private nursery/primary school and from there I was employed in 1996 by the National Drug law Enforcement Agency, where I attended Usman Dan Fodio university and got diploma in mass communication in 1999. when i was serving in Fokoto state in North western part of Nigeria, and from there I was transferred to Lagos state in south western part of Nigeria, I then proceeded to Lagos state University where I got bachelor in History and International Studies. Since employment I have undergone basic law Enforcement training from NDLEA Academy jos, Citizenship and leadership Training course Jos, Instructors training course by American Academy under UNODC in Lagos and Standard Policy and Practice Guidelines for Counsellors working with NDLEA under the UNODC in Jos.

I live in the Badagry local Government area of Lagos near the border of Nigeria and Niger republic. My interest is to be able to lead people rightly in any where I am call to serve because leadership in Africa is not standard and most of the leaders does not know what they are doing even those that know are been influence by politics negatively in been able to deliver the basic human entitlement under the fundamental human right in moralistic aspect or as entrenched in the international human right charter furthermore I like travelling to know more about other people leadership perspective in relation to their culture, I like watching action movies in the cinema and at home, I like neat and descent environment and I hope one day Africa would one day enjoy the basic Amenities especially Nigeria.