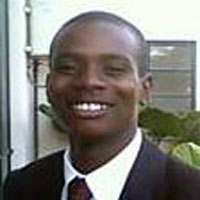 Please describe your vision of a world that works for everyone.
It will be world where there is equity and fairness between the rich and the poor, where other nations do not enslave others through financial aid. A world where there is a strong war against poverty and not humanity, a world that is not sustained by donations but a world that gives room for empowerment to the frail and the weak. I envision a world that upholds Human Peace, Human Justice and Trade Justice, a world that combats corruption and above all priorities the ending of Global Poverty and ultimately a world hinged on prudent, honest and transparent leadership.

What do you see as the most pressing problems facing the world today?
War, terrorism and hunger are some of the pressing issues of the world today, however global poverty overrides all these predicaments. This social ill has permeated every dimension of culture and society and to a larger extent it is highly visible in undeveloped and developing nations. Poverty has resulted in the ordinary person failing to access basic services as quality education, proper health care, access to clean and safe water and other necessary services. This multifaceted problem has its root causes in other ills as devastating wars, slavery and colonialism. Poverty has now been propelled by other factors as failed leadership, too much dependency on aid and dishonest by high office bearers. Let us now stand with one voice and in one accord to fight this monster called POVERTY through exemplary leadership.

How do you feel these problems could best be solved?
The biggest problem of poverty can only be solved if as a global world we concentrate on alleviating individual poverty first before we might want to solve it from a national or global scale. For instance if individuals’ lives are changed, families change so do a nation and ultimately the globe. We need to mobilize ourselves and counter attack the factors that are sustaining poverty. Dependency should be eliminated through empowerment; dishonesty amongst persons of power should be tackled through transparency and accountability, the ordinary people need knowledge and wisdom to strengthen their capacity of sustaining themselves. We must not despair in solving this problem, let’s encourage one another to think globally and act locally.

Profile
I am a 21 year old vibrant young man, I did both my primary and high school education in Harare. During my early days of high school I always wanted to be a Chartered Accountant, this was as a result of my father who was in the accounting field and I was always a good accounting student during that time, however later on in 2006 there was a change of fate when I enrolled for my undergraduate, I switched from Accounting to Business Studies majoring in Finance& Banking. As far as I can remember I never used to be a sporting person, only that I liked watching tennis matches only until have i started playing squash and table tennis. In 2008, I was one of the 10 students from the University of Zimbabwe (a University of +10000 students) who attended a Transparency Leadership Seminar that was hosted by Transparency International Zimbabwe (TIZ) an affiliate of Transparency International, and awarded certificates of the transparent leaders of tomorrow. My dream is to become a leader in Africa’s Financial Solutions and would want to see an African renaissance in my generation. My dream aims at impacting not only Africa but the whole world, i believe in empires that run from generation to generation .I aim is to become a Chartered Financial Analyst by the age of 27, and do an Msc in Finance and Investments before the age of 30. I have networked with people in Tunisia, South Africa, United Kingdom and Botswana in preparation of being a Global Financial Leader. I have read quite a number of books as Rich Dad Poor Dad by Robert Kiyosaki, Napoleon Hill’s Think and Grow Rich, Purpose Driven life by Rick Warren and my favorite ever The Runaway Jury by John Grisham. Currently iam studying an Honors Degree in Finance and Banking with the University of Zimbabwe and will be graduating in the year 2010. Iam currently on vacation and working as an attaché student with a local bank. My short-term goal is to get into Investment Banking just after graduating and amass as much as possible experience before I get to the age of 30, later on I would want to engage in Financial Consultancy, where I would be involved in managing projects and consulting in areas of investments. On a broader perspective I would want to start a non-profit organization responsible for engaging in Global Poverty Reduction and Alleviation specifically targeting the widows, the aged and children through financial empowerment and impacting them with the most needed knowledge and wisdom. To sum it all, I always give thanks to my parents and my little brother who have been with me always in good and trying times, giving me spiritual and physical support. Iam a firm believer in a world that will ultimately unite for the betterment of every individual, I have faith in the leaders of the coming generation, a generation that will produce honest and responsible leaders a generation of leaders I will be part of. “The quality of a leader is reflected in the standards they set for themselves”- Ray Kroc