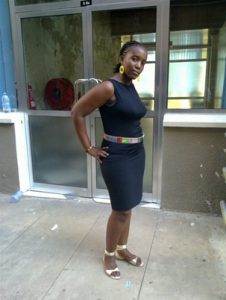 The world I see to work for everyone, is the world that every child whether is in Africa, Europe, Asia or America get access to better education and healthcare, all people are equal despite the colour or belief. I see the world that provides enough that people do not go to bed with empty bellies. I see there is democracy in the world and people do not fight to be in power.

What do you see as the most pressing problems facing the world today?
Terrorism, this is one of the major problem pressing the world today, people die and many are left wounded everyday, mostly in North Africa and middle east countries and some parts of Asia, European countries and America are also as there have been reported many of terrorist attack attempts.

Environmental degradation and global warming, this also is another challenge the world faces today, especially in Africa sub Saharan countries where many countries has gone short of rains in recent years due to increased global warming, due to huge emissions of carbon monoxide which destroys ozone layer, people have been cutting down trees without replanting new trees, increased number of vehicles, rapid population growth which increases domestic

I am quite sure that many of countries especially those that have been targets for terrorist are thinking of the better solution for reported on going terrorist attacks, I suspect there must be hidden agenda which are most of the top secrets that many people are not aware of or have not been put open to the world. Why would a person wear a bomb to kill himself/herself and others who are innocent? Why there shouldn’t be negations between two parties that have been enemies? The best way to solve problems is by sitting down and talk. People should come into peaceful agreement what can be done to make the world better place to live for everyone.
Global warming – Countries should have proper policies in place and clear strategies to address this issue.
Increased Unemployment – one solution for this is when youths in schools are taught to be job creators and not job seekers. When people work hard to improve live of everyone rather than being selfish to take everything good for himself and his family. Once every person works best to improve the living of all people in his own country, we reach a point where no one will go to bed with empty belly, and every child despite where she/he is, gets access to better education and healthcare.

Governments should have clear and working systems that regulate prices in the markets that will neutralize prices if business tycoons decide just to charge high prices especially for products/ services of basic needs to people with no good reason.

My name is Jestina Japhet Kimbesa, born the second from a mother of five. I was born in East Usambara Mountains 29 years I go, grew and school in two different regions in Tanzania. I got my primary and secondary education in east Usambara and later moved to Dar es Salaam the largest city in Tanzania for high school and college; I graduated college in November 2010.

I can describe myself as sincerely ambitious, attractive and funny. Quiet and introverted, self reflective, but still a good conversationalist, genuine care and concern for people. I also believe in the individuality of human beings, the autonomy that we are all borne with, I accept individuals generally, as I believe that people can work on each others personality and character, and compliment each others’ weak spots.
I am from a family of five children of the same mother, but two of us share same father, my junior is a boy, I love him as he is my best friend although we used to fight when we were young. I and my brother grew up in our father’s house, after divorce my mother was remarried to another man where she had three more children. I am a single parent of 10 years daughter who was born just after my high school. I am fond of watching movies and series based on true stories, Ashton Kutcher is my favourite actor, Julia Roberts is the actress I admire most, I also love reading motivational books; Robert T. Kiyosaki with his Rich Dad Poor Dad, Rich Dad’s Cashflow Quadrant, books has inspired me to thrive for the best in life. Another book that inspired me is Why We Want You to Be Rich: Two Men, One message by Robert Kiyosaki and Donald Trump

I also love sports, both in secondary school and college time I was in school netball team, I love music, I can sing and I enjoy dancing.

My leadership journey started in early years when I was in secondary school when I was selected to be Head prefect of self-reliance portfolio at St. Mary’s Mazinde Juu Girls Secondary School my roles were to coordinate all of school projects and overseer of the activities done by the students regarding the school projects. In College all of my three years spent there I was in leadership team, in first year I was appointed to be Class Representative in Students Assembly my roles were to represent all issues regarding my class to the assembly, attend the assembly meeting on behalf of my class. I was the intermediary for communication between Lecturers, students and course coordinators & tutors. I also represented my class in the College students disciplinary committee.

In my second year I was selected to be the Principal Secretary for Disciplinary committee in Students’ organization government cabinet. In third year I had three positions, I was the deputy minister for accommodation and campus affairs where I was responsible for campus affairs in terms of cleanliness of classroom, cafeterias and all collage surroundings. Safe and clean hostels for students’ accommodation, also I was overseeing the security of students and their properties while in campus. Same year I was a member of International students organization (AIESEC) where I was the local chapter vice president projects. As the overseer of projects portfolio, I was responsible for coaching and facilitating sales training to project team members, managing project sponsors contacts’ database and keeping them informed on the progress of the project. Writing concept paper, proposal and report for all local chapter projects, projects planning, budgeting, managing the implementation project’s structure and organizing fundraising activities for the project, coordinating national and local chapter events, conferences and projects launch events.

Furthermore I am a bit involved in politics, during my final year in college 2010, I was the chair of CCM Women Union (UWT) at Institute of Finance Management CCM branch; CCM is Tanzania’s ruling party.

In my school life apart from studies also I had time for extra curricular activities, In AIESEC Tanzania (The international students’ organization where I was a member). I was attached to projects portfolio. As the first Vice president Projects, I managed to run ICT and Answers Solutions & Knowledge about HIV/AIDS projects to high school students and Microfinance & Entrepreneurship project to Tanzanian youths that are out of school; also managed to raise fund for the project that impacted 500 Tanzanian youths. MFE was awarded the best project of the year 2009/2010.
Furthermore during my tenure, I was able to enter into partnership with an organization which contributed more than any other company in the history of AIESEC in Tanzania, impacted more than 500 youths in Dar es Salaam. And as a result the project was awarded the best project of the year 2009/2010. Also I was in a support team that planned and organized students career fair 2010 that attracted 24 companies and more than 5000 university students, as team member I managed to bring two companies to sponsor the event.

After my studies in I got job at the British Council as Project coordinator, where I coordinated three different projects, and lately in October 2012 I joined Department for International Development Tanzania as Programme Assistant where I support 8 different education, water and health projects.

Always I have been ambitious person as I see I have many goals to achieve in life; there are some that I have accomplished which is to work to respectable international organization, still working in others. In few months I want to start my masters degree which I hope will take me to PhD, just after completing masters in international development. My biggest dream and goal is to be the motivational speaker, where I live I see and meet people who needs to be motivated in order to make changes in their lives and community at large. I feel like I should take to people and help my community and nation at large.

I love travelling and wondering the world, in my life I haven’t travelled out of Africa but I have travelled to east and southern African countries. Being out of my country has taught me that when you go to new places, you learn new things, meet new people and expand network.