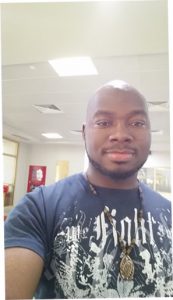 The reason why I am participating to this program is to learn new technical leadership. To have impact on the life of communities village Mouanguel. My province Littoral.

My country is Cameroon. Africa and the world

The illegal migration to Europe and the USA. Hunger, War, Religious, Xenophobia

To solve the problem of migration: People and especially Africans that I need to realize that no matter where a man is he can became rich if he check opportunities that Africa has and the Africa is the place now.

Hunger problem: We need to train people on agricultural and entrepreneurship program more than marketing or accounting program etc and that will also help on reducing an employment and financial problem that face the world

Ware and Religious Problem: We need to educate people on the spiritual believe that we are all one in GOD. For example if we take out religion and having only one the world will be a better place for everyone and we will not have any war because most

Xenophobia and Tribalism Problem: We must remember African people of their history from where the are coming from because many Africans do not know their origin so that the will take away that evil mind that push them to react the way the are doing

I am Jean Jacques Etouke Mbebi. I am an entrepreneur/seafarer. I was born in Mouanguel village in Cameroon. I am a forth child in a family ten. My struggle started at the age of eleven when my father said to me that he can’t afford to pay for my secondary school in the neighboring village. At that time I didn’t understand what was going on.

A few days later after all my friends have left to the neighboring village to secondary school I felt so bad, that was the turning point of my life. A month later my aunty came to the village and took to the city .thinking that I will go to school there but it wasn’t the case. But I do appreciate her for taking me to the city because if not for her my life will not be the way it is today, at that time she had no money or job ,so couldn’t pay school fees for me but she always encourage letting my moral up.

When I have arrived in Douala, I started doing small business ,selling cigarettes, peanuts, the pure water. Doing that I could save money and pay for myself to attend evening school. Years later in 1998 a friend of mine trained me how to cut hair. After the training in 1999 I used the money I have saved when I was selling water to open my first barber shop.

It was just one small bench and a broken mirror, at time goes I upgrade my shop .Two years later I open one of the best barber shop and I took my two younger brothers with me .before then I had left my aunt house to rent a room.

In 2006 I left my country to South Africa Cape Town, I was taking away by the wind of migration. Thinking that overseas is better than my home country. When I arrived in Cape Town I had to start from square zero been employed again or at home I was a boss on my one, it was not easy my boss then was not a social person. Months later I said to myself that if in a year’s time I don’t open my own shop in Cape Town I will go back home to my shop. Ten months later in South Africa I was bless with a shop and in a very good position .that was on the 10 June 2007.Today after eight years in South Africa I could employ over six employees and is call narcissi barber shop and is the best barber shop in Cape Town I am married with two kids a girl and boy; Bolla and Miguel

I want to send them in the school in the world that I couldn’t attend because of money.

As a seafarer I have participated in oil and gas project in Saldhana Bay with Carina offshore. I am educated; I mentor young Africans people on the problems that we are facing right now

My dream is to be a blessing in my country one day create job opportunities, educated, mentorship program on youth in entrepreneurship take advantage of the opportunities that we have in Africa in various sectors, such as agriculture, factory shop etc because the are the future. I love travelling. I have been in Kenya, Ethiopia, Namibia, South Africa.

My favorite book is, “How to become Rich.”

I hope to open the biggest barber shop every where in African countries to create more employment , innovate the transport system in Cameroon because I believe the economy of any country can’t moved forward without a good transport system that is organized.