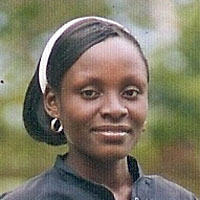 What is your vision of a world that works for everyone?
I can envisage a world where everyone plays their role with absolute sincerity, where all voices are heard equally, where cheating, hatred, immorality and all evil that hunt mankind is not heard. A world where positive potentials are fully maximized and only the champions are given the award and the mediocre are made to try again until perfection is reached. A world where the rights of the low and average are observed; where power rests on the responsible only, courtesy of the masses. A world of love where peace and harmony rule and reign.

What do you see as the most pressing problems facing the world today?
Putting into consideration the recent happenings in my country, it is with this that I’ll opine that Corruption serves as a cankerworm eating deep into the root of the globe. In all facets (economical, political, social etc.) the world has been dealt a terrible blow by this brute. Corruption builds the foundation upon which every other problem takes its existence. What would have made a man to sell his future and his generation’s for a transient token? Because he’s corrupted with covetousness and greed. What would have cause people of the same sex taking the sacred marriage vows? Because they have been corrupted with foolishness of lusts. What do you think is the reason behind our youngsters living and even idolizing immorality at the detriment of their future? Because the leaders are not leading by example and so the youth has none to lead them aright. Why the prevalent rate of divorce in the world today? Men have given up their conscience to Corruption of deceit, women are been pinned down by the Corruption of materialism.

How do you feel these problems could best be solved?
For an understandable change to occur there must be realization. The rulers and the ruled should come to a point of absolute acknowledgement. “No discovery, no recovery” We must all own up that we have not been doing it right and wake up to the clarion call of morale. There should be a personal inward check up by everyone and a sincere result of wanting to turn new live.

Corruption has been in existence for ages e.g. Judas who sold his master for a token of thirty shekels. So we should take into cognizance that to curb or eradicate it requires genuine strategy with patience. When personal determination has been employed, then every unit (family, religious organization and society) that makes up the world should play vital roles in imbibing in their members – the spirit of purity and the virtue of discipline. Because “discipline is the bridge between goal and accomplishment”

Profile
I am born into a family of five – three children where I am the first child. Academically, I couldn’t make the choice of my field earlier due to indecision. So I went for Sciences during my college years. Now I’m looking forward to obtaining my first degree in English Language because I’ve come to realize that therein lies my yearn for vision. Right now I work with a corporate firm as the Administrative Office. Personally I appreciate creativity in art. I am a writer – poet, a teacher/counselor and a speaker. Also I am into decorating business, I bake cake and I have other businesses also. Though I don’t have an outlet yet but I operate from home and the name of the company is More than Rubies. By God’s grace, I am looking forward to becoming either a lecturer in English or an ace broadcaster. I like Brian Tracy’s quotes and also books authored by T.D Jakes. A movie that I watched and left an unspeakable impact on me – Passion of Christ.