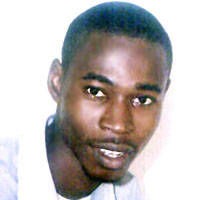 Please describe your vision of a world that works for everyone.
A world full of peace, love and friendship with food for all and every nation being tagged developed countries without the tagg 3rd world or developing countries been used for us here in Africa, the carribean and other parts of the developing world. A world where every nation lives in peace with no wars, no famine and no disease this i believe to an extent we have the power to create.

What do you see as the most pressing problems facing the world today?
Quality education and excellent leadership. There is already a form of education (albeit western eductaion) in all parts of the world but there is a lack of quality in some of these education, peopel are been equipped with archic skills that cannot even put foot on the table for themselves let alone a family. Also there is a lack of quality leadership, with dictators and saddists in the name odf lewaders who seat ontpo power for ecades engaging in corruption and enriching thier purses and that of their friends and relatives with the
proceeds of the land.

How do you feel these problems could best be solved?
If only governments, indiviuduals and corporate bodies set themselves up and pump further funds into eduction, quality education that makes the learner live productively in this computer era then one of the world’s major problem is gone. and i don’t mean that all forms ofr the besyt form of leadership should compulsorily be democrazy, fine even if it is communism the whole world wants to practise it should go ahead but the leaders must have the welfare of their people further most on thier hearts and strive to do all within their means to better their lot.

Profile
Francis okaformbah is a young man of 24years old born in lagos, the erstwhile capital of The so called Giant of Africa,cum heart of africa NIgeria. born with a passion to lead and am ambition of becoming the president of his country some day good willing. He is a christian by faith a catholic by denomination.and loves reading esp the word of God and praying. he also loves writng as a hobby, a passion that he has turned into a business as he now has 3 books in the market,- 2 fiction and 1 non-fiction (THE GREAT MAGICIAN AND OTHER STORIES, SAVANNA ADVENTURE and HOW TO SELL ANYTHING ON THE INTERNET) and also writes feature columns for several newspapers and magazines. He loves to travel, watch cartoons, and is presently preparing to gain admission to further his stuidies under english language major, or english language literature in the national open University, (NOUN) lagos. he is currently a member of various improvement organisations like CHANGEMASTERS ( a leadership and public speaking club), SUCCESS DIGESTLEADERS CLUB- SDLC, ( a business training and mentorship outfit of Dr,. Sunny obazu-ojeagbase, Publisher of Success digest magazine and Complete Sports newsapaper.) A holder of several leadership posts in the church francis is seriously searching for love but lives with his widowed mother and 4 siblings. he also loves watching football and his favorite club is EYIMBA INTERNATIONAL OF ABA. – the Aba millionaires or people’s elephants as they are called. He is elegant, tall, handsome, daring and handsome and will do all ( legally ) that will lead him to success, he believes in hardwork and paying your dues and in the fact that when God says its time for you to blow and be a success, you will blow.