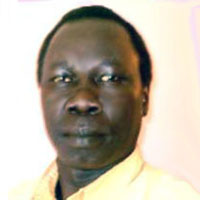 Please describe your vision of a world that works for everyone.
The world that works for everyone, is that world without prejudice, racism, ethnic/political affiliation, freedom of religious belief, equal sharing of national resources, employment base on merits and not next of kin, a world with effectiveness, transparent and democratic values, where everybody is equal before the law. A world where resources are shared equally, a world where everybody has a right to education, social and political role to play.

What do you see as the most pressing problems facing the world today?
The most pressing problem facing the world today, are Illitracy, poverty, social and political corruption, Dictatorial regimes get away with crimes against humanity, or rather they are above the law. We need effective, neutral and independent judiciary system with power to arrest individual violating human rights. Thus, convention is badly needed to address such urgent needs facing the world. The world will not advance as long as it has no institutional system to effectively enforce the law.

How do you feel these problems could best be solved?
The world pressing problems can be address and solve, through effective, transparent and democratic governments. Effective and transparent governments can be obtained through a long term reformation program, set and control, by responsible citizens. Such program will focus on new generation, whose interests and rights will be respected by all. Transformation directed at social, cultural, political, economical transformation. If we can reform our cultural method of discipline, initiations into adulthood in certain societies in Africa and other developing nations, then we can form new generation that will be honest, effective and responsible citizen. Therefore we need good leadership to implement and execute such programs. Every citizen of a nation will be charged with responsibility to execute the program, and every citizen will be protected, socially, financially, by the government.

Profile
I was born in a small town in south Sudan, called Torit, in the middle of the civil war that ravaged the country from between 1955 to 1972. I started my elementary school in 1978, but with much difficulties and irregularities I completed my secondary school in 1990, in the middle of another longest civil war in Sudan, between north and south. The war erupted as a result of race, religion and control of land resources.

I had wanted to be a doctor or a lawyer, but my dream was not what I should follow. In Africa, you must follow what your parents want you to be, thus, my parents wanted me to be a teacher. After my secondary school, I joined the Catholic missionary congregation, and I was told to study in a technical school and become a brother. I follow technical training for 2 years. Then a 2 year course on religious life. I took the vows as a missionary brother, and follow courses at the university where I completed and was awarded with a BA degree in social sciences.

I have to admit that, I had never had chance to study and become what I wanted to be. I was always told what to study and at the end, I ended up a different person. I studied several skills and have ended up being an activists. My experience of the civil war has help me to lean towards the studies on conflict managements or rather conflict resolution. I become critical about why people fight each other and what can be done to have a peaceful and better world. This is where I got stuck after leaving the missionary career. I became critical of being a religious person, because, I was told to evangelize and convert people into my religion, a view I disputed and I was forced to quit the religious career. I did not want to force people or ask them to convert into my religion. I realized, religion was one strong factor in most conflicts and civil wars, including that of my country, Sudan.

I participated in several activities, including leadership, in which I was elected to lead the youth and mobilized them for to join and support the war in Sudan. It was a difficult task, but for the love of my country, I mobilized the youth for about one year, and quit the job, after which I was accused of being negligent, and fired. I love to mobilized youth and teach them, but not take them to war.

But generally, my world view is shaped by my academic career and refugee life experience for the last 23 years. Therefore, I love and believe in democracy. The system we all admired, where people are free mentally, socially, politically and economically, although there is still problems to be solve in the democratic western world, there is a degree of success, and all human beings embraces the peaceful and democratic system, given the asylum influx that we read on the newspapers.

As A Man Thinketh
Jonathan Livingston Seagull
Keys To Success
Psycho-Cybernetics 2000
Success through a Positive Mental Attitude
The New Dynamics of Winning
Real Magic
How to Win Friends & Influence People
Giant Steps
Goal Setting 101
Nonviolent Communication
Leadersip for Dummies
Goals!
The Power of Intention
The Law of Attraction
Unlimited Power
Conscious Acts of Creation
Gandhi, An Autobiography
Development As Freedom
How to make Collaboration Work
The Ecology of Commerce
Globalization and Its Discontents
Educating for Human Greatness