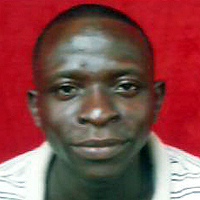 Please describe your vision of a world that works for everyone.
My vision of a world that works for everyone is when and where governments with resources take care of their people and won’t be corrupt. By taking care of their citizens’ basic needs- healthcare, shelter, education, etc.- everyone can focus and join ideas then help to play a part in the development of their country. If governments are
corrupt, people are too worried about putting food on the table and thinking about how to best overthrow their government, which in turn, can lead to civil wars.

What do you see as the most pressing problems facing the world today?
is terrorism. Terrorism affects everyone in the world because you never know when or where the attack will take place; moreover, it keeps everyone on edge and in a state of paranoia. Global terrorism is being fought by many countries and is seen as the greatest problem that the world currently faces. Billions of dollars are spent annually on terrorism and many lives are lost fighting for a free and safer world. Many innocent people have also died and many are expecred to die due to terrorist attacks across the globe. People all over the world now have resentment towards Arabs and Muslims because they feel that these groups of people are terrorist. Having this feeling towards Arabs and Muslims is a problem because now they live in fear of being retaliated against and leads to grave consequences for both sides.

Profile
My goal in life is to become a good leader – a leader that is not partial – a leader who cares for everyone, a leader who believes in intellectual forums, a leader for the people. I want to travel to other countries of the world and become known for my work as a great leader who is respected in all societies. I have always dreamt of good leadership in my country and in foreign
countries as well.

My favorite movies are movies from western countries. Although I have not gone through extra studies apart from what I went through in high school, I have participated as a leader a few years ago. When I was in high school, I served as the senior class president and exhibited good conduct as their leader. It was from that point and my experience that I developed a likeness for leadership and got to know that leaders can be made and not born as I, and so many others
thought. I also have high experience with my family members. I have received some obligation for leadership because I am the only male child who has reached this far in learning and have settled some family disputes and matters. For these reasons, I am highly respected in my family for my timely intervention in family matters.

I have also had some previous link with the International Committee of the Red Cross (ICRC) five years ago. I worked with them when the war subsided in Liberia in Foya District and helped to serve my people who were the most vulnerable after the civil conflict. I helped to give some humanitarian assistance in the department of Economic Security (ECOSEC) on a voluntary basis. I also participated in conducting National Voters Registration for the 2011 elections in my country.

I am a Christian, and I would like to get married in the future and have a family of my own. I love to sing and am a very good singer, I served as a choir director in my church and as an accolade in the same church (Holy Name Episcopal Church- Foya Branch) in helping my Priest to keep the Word of God at the time. I am not too quick to anger, I believe in sharing jokes and fun with my friends and counterparts. To be sincere, I love sports such as football (soccer), and my favorite team is Chelsea FC in England. I am just a self-supporter and yearning for better education and with your support, the sky is the limit. I thank you for your time and your interest in me.