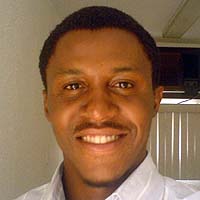 Please describe your vision of a world that works for everyone.
When greed is removed from the heart of men, only then will my picture of a world that works everyone be lucid enough. Greed gives birth to jealousy and these two evils in my opinion greatly tilt the scale away from global peace to violence and war. Take away greed and America will not have gone to Iraq; Israel and her neighbors will not need to throw spears at themselves endlessly; the so-called super powers will not need to spend fortunes on weapons of mass destruction; African leaders will not seek to hold on to power endlessly aimlessly while emptying their nations wealth into their own pockets. I believe a world devoid of unbridled greed will be a peaceful world where men will respect and uphold the golden rule: Do unto others as you will like them do unto you.

What do you see as the most pressing problems facing the world today?
Religious Intolerance: The world today is terribly afflicted by spates of religious bigotry and violence. That of the Middle East is most prominent and has lost so many lives and property. The Islamist fundamentalists have in the disguise of religion carried out very horrible terrorist activities backed by a ludicrous divine reward for such inhumane acts. In the northern part of my country, there have been spates of religious violence which are always between the Moslems and Christians, with Moslems burning churches and maiming Christians in very flimsy disputes.

Poverty: This problem is fast ravaging the most of Africa and some parts of Asia. The U.N. Development Program estimates nine out of 10 Nigerians live on less than $2 per day. And according to UNICEF, one in five Nigerian children does not survive until their fifth birthday. This however is not peculiar to Nigeria alone and its implication is: Africa’s growth rate will be negligible and in corollary the collective development of earth’s inhabitants will be inhibited.

Pollution: This problem cuts across every continent especially the developed ones and its destructive effect on the entire continent is colossal. Global warming, erratic climate changes, extreme weather, disease outbreaks, oil spillage, drinking water shortages, to mention a few of its evils. Technology has greatly advanced humans but its advantages have come at a very high price and to continue the present trend will be inevitably self-destructive on the longer run.

How do you feel these problems could best be solved?
Solution to Religious Intolerance: I cannot truly say I can offer a solution to religious intolerance because of how delicate and almost timeless this has been on. However, in my opinion I think the Government of a land has major roles to play in dousing the hate that exist between major religions in a land. Most fracases fueled by religion almost always begins with a careless a utterance by a top-placed individual or a sensitive report in a newspaper. The Government must establish punitive laws on remarks or social discrimination against any religion as-well-as extensively promote similar and converging teachings that exist between different doctrines.

Solution to Poverty: Poverty is a function of many and diverse conditions. Some of these conditions are geographical, others are social and cultural. Therefore employing any curative measures that does not first examine the roots from which this disease sprouts will only achieve very temporal success. I’ll only discuss poverty in relation to Africa because I believe the two are synonymous. The developed countries have given loans, relief materials and even dept relief worth billions of dollars to Africa without achieving any significant decrease in the current level of poverty. Why? The root disease has not been cured and I strongly believe that its roots are etched into the hearts and mind of the Black man. Our culture, beliefs, work ethics, government and a host of many other fragments of self-influenced factors tie us the disease called poverty. Poverty in Africa will be best solved by a shift in the paradigm that looks mainly for help from outside (developed countries) to that that seeks to develop the inside of every black man by every black man. Our leaders must cease to subscribe to dictatorial means of government and the-winner-takes-all mentality. We must learn from the developed countries how to establish economic policies that are strictly guided by principles of accountability and productivity. Our leaders must rid themselves of excessive greed and inordinate ambition that seeks to edify members of their family and friends leaving the rest of the masses impoverished. It might interest you to note that not a single university in Africa is ranked amongst the top 100 universities in the World and all Nigerian universities fall short of the top 500. Good education and knowledge is a requisite tool for developing/reinventing technologies and processes that can attract wealth. “My people perish for lack of knowledge “is a popular quote from the Christian bible. For a country like Nigeria to have made over $40billion from oil exports in 2006 and still be ranked second poorest in the World (World Bank Sept. 2005) shows that human resources development must precede natural resources development, the opposite being the scenario in Africa. Also the fact that the foreign direct investment (FDI) inflows into Africa in 2005 was $31 billion, with Nigeria getting around $3bn without any consequent reduction in the level of poverty leaves a lot to be desired other than receiving handouts from the developed world.

Solution to Pollution: This problem can be solved by no easy means because the wealth amassed from overlooking its dangers is obviously too attractive to many to consider its consequences. Its no secret however what the long term implication of ignoring the dangers of pollution portends to the existence of our universe. The society of science in collaboration with the governments of the developed economies must make sacrifices that will yield safer technologies and cleaner fuels for the sake of us all. If we must survive another millennium, then, we must heed the warnings of nature that have come by way of: Tsunamis, hurricanes, floods, extinction of life forms and death, to mention a few. A shift from the energy sources that deplete our ozone and warm our atmosphere to cleaner sources e.g. fuel cells, solar panels, hydro and wind energies etc I believe is one major key to “Ensuring Environmental Sustainability” as vaguely stated amongst the MDGs.

Profile
Have you read about Joseph in the Bible? You know a little about me already if you have. I’m a dreamer. Since I was a little boy I’ve had big dreams, I feel I’m one of those assigned with the task of affecting my generation in a major positive way. Wrestling the Angel though has not been as easy as it looked in the case of Joseph.

Life for me started just about the time I lost my milk teeth. Any memories before then have corroded with time in my hard disk upstairs. I never really liked life as a kid. Not that I was deprived in anyway of the things children loved to play with but because I envied the independence and authority I saw in the grown-ups. I would sit on my back in public so my shoes would touch the floor like the grown-ups, I’ll insist on trousers instead of shorts, and when I saw a couple, I’d wish I was old enough to woo the lady if I thought she was pretty.

I took countless cane strokes mostly from my mum and some from my school teachers back when I was in primary school. My mother will flog with her cane or her mouth. Either way was painful enough and once when I was eight I wrote a letter threatening to run. Sweet kisses from the cane stopped me thinking in that direction.

Nevertheless my mother was a very strong, caring and loving person and ten years after she passed-on I still hear her laughter ringing out with the excitement of a school closing bell and I miss her painfully. As a young boy of 16 her death was a major blow. I kept asking many questions about life to no one in particular and I felt betrayed wrongfully by God. Now I’ve come to terms with her demise and believe someday it’ll be my turn to sleep. All I earnestly pray is that I’ll leave behind timeless footprints that will beautify the World.

I love football and especially that played in the English premiership where I’m a Manchester United fan. I still relish the taste of the treble success of Manchester United when we won three major titles 1999. Some day when I have my family, I’ll travel there to watch some live matches.

I love to read books that inspire oneself from authors like Napoleon Hill, Brian Tracy, Stephen Covey, John Maxwell, etc and I love biographies, especially those of Thomas Edison and Abraham Lincoln.

In the fiction category I enjoy works from authors like Sidney Sheldon, John Grisham, Mario Puzo, Jeffery Archer etc and I’m currently reading a great piece of work – Pleading Guilty by Scott Turrow. And my best actors are Al Pacino and Anthony Hopkins.

Honestly, I love to dream. One of my dreams in life is to found a Children Development Centre; this will cater for the needs of the orphans: physiological, emotional, and educational especially, to help offset the deck stacked against him/her to succeed.

While I was in the university, I started some businesses that failed flat but it still hasn’t stopped me from believing that the Great Porter put in me skills that will enable me positively affect key sectors of my country’s economy in my time.

I have 1 brother and 5 sisters. I’m number _ which means my twin sister and I make up no. 1. My siblings are simply the best in the world. The love we share is invaluable and sweet and I’ll trade nothing for it.

Am currently working in an Engineering firm in Lagos, Nigeria as a Youth Corper. I’m a graduate engineer. In my country, a graduate must complete a compulsory 1 year National Youth Service Programme before he starts a full job. I’ll be done in Aug. 2007. That’s a little about me.