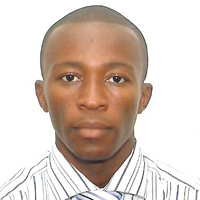 Please describe your vision of a world that works for everyone.
In this regard, I see a community where youth come out of school with very employable skills, have knowledge of the ways in which their environments can be protected, their natural resource can be managed and do not find themselves at a dead end but are gainfully employed. I see a world of continuous human resource development which will translate into effective leadership; leadership that does not cause frustration among its followership. This is likely to end the upheavals and populace unrest that we currently see.

I dream of a world of safe and harmonious environment, a world where dialogue easily reaches a decision and implementation of development policies is a priority. I see a world with leaders who have built trust from their youthful ages and have a common goal: to save humanity. A world where the rulers and the ruled are both satisfied and hence humanity no more fears, but hopes, in its future.

What do you see as the most pressing problems facing the world today?
I see a huge gap between society’s populace. In many societies including mine here in Ghana, there is an unfair partition between the rich and the poor, the literate and the illiterate, the old and young and between tribes and civilizations. I believe this disparity is the very basis of societal strife and criminality. There is the need for effective mechanisms to provide everyone with the opportunity to survive. In many developing countries like mine, wealth and power are concentrated among a minority few, with the majority living behind and peeved with their unfortunate circumstances. For me, this is the essence of giving the Millennium Development Goals the needed attention; creating development opportunities for all. Unless this is achieved, our societies would become very unstable, sitting on time bombs. I am convinced that most of the societal and military upheavals have their foundation in this big societal gap. In the same sense, the leading generation needs to orient the younger generation on the state of current circumstances and prepare the youth to effectively take over from them. Life is a continuous process and as populations turnover, there is the need to prepare us the youth to continue with the efforts already started. Currently, there are inadequate avenues for youth to learn from their leaders about the state of affairs and get insight into the way forward. Therefore, I see a society in which the there is a big knowledge gap between the elderly and youth, especially knowledge on policies for a better future.

Another gap I find in society is that of tribe and religion; the gap of civilizations. If we need to develop, there is the need for peaceful co-existence among religions and among tribes. In Ghana, we have had a couple of tribal strives in the north of the country. Across Africa there have been religious strives and in the world the West and Islam have been at the crossroads. It is sad to say that in the past we have paid prices for this gap by witnessing grave genocides. However we seem not to have learnt enough from them. Humanity is equity, and we all, irrespective of our orientation have a common destiny.

Moreover, as a passionate student and advocate for the Millennium Development Goals, I am concerned about the environmental problem of climate change. This is because the effect of global warming has a lot of health, security and economic implications especially on developing countries. The effect of the gradually warming globe has given birth to a complication of health problems, prominent among them being upsurge in malaria. These health complications could invariably decrease the general life expectancy thereby decreasing productivity.

Because of the adverse change of climates, there is feared increase in migration which will eventually lead to congestion and slum development. The struggle for resources and survival in such circumstances has significant security implications. It is worth noting here that the precursors of our changing climate are also breeding a discourse between countries and between different civilizations. There is gross misunderstanding between the world economies about how to solve the problem and how to ensure that the poor do not suffer unjustly from the economic endeavours of big economies. Slowly, this problem is fueling tensions and unless steps are taken to bring an alliance of ideas, the security risks are obvious.

How do you feel these problems could best be solved?
During my participation in the Peace Conference of Youth held in Japan by the Junior Chambers International, Osaka, I had the privilege of interacting with and listening to an inaugural address by the 14th Dalai Lama, a Nobel Peace Prize Laureate. In this address I derived the lesson to always look first to myself in my quest to find solutions to problems around me. Hence my proposed solutions will start with my efforts.

Peaceful co-existence is based on effective dialogue and understanding. This is the major tool that has helped the world bodies such as the United Nations to maintain some level of peace in the world. I believe in this principle of dialogue for peace and development and hence I have committed myself to creating the platform for people to share their ideas, grievances and satisfactions with other people. Dialogue is ongoing on the big stage, but this needs to be disseminated to the lowest levels of societal structure.

I am working with the NGO, Life-link Friendship Schools, Ghana as Deputy Director of programs to organize conferences for Ghanaian youth to discuss matters of international and local importance, especially, issues such as HIV/AIDS, education and climate change that affect them as youth and their future. If this kind of platform is rolled out extensively worldwide, it will create the opportunity for people (youth) to work together and understand each other as they get used to diverse beliefs and cultures. I believe that the peace we look for in the future depends on the kind of mind-set we have in our current youth, hence my motivation to carry on this project to bring world youth together.

There is also the need to use technology and ICT to create a virtual link between peoples from different parts of the world for the purpose of education (as IIGL is doing) and for the alliance of civilizations. Human Resource Development should be the watch-word for all leaders.

Profile
Dennis is a 25 year-old Ghanaian advocate and activist in youth and community development work. He volunteers as Deputy-Director of Programs for Life-Link Friendship Schools, Ghana which he joined in 2005, as West-Africa Manager for Youth Action for Change which he joined in 2010 and has volunteered for the United Nations in his service as Secretariat Member for the First Global Model United Nations Conference on the Millennium Development Goals (MDGs) in Geneva 2009.

He holds a BSc. Degree (Hons.) in Medical Laboratory Technology from the University of Cape Coast, Ghana. He likes writing articles and attending conferences in his quest to meet more people, share ideas and create networks for development. He speaks fluent English and Basic French.

Over the past 5 years, Dennis’ activities include participation in various Model UN conferences in Ghana and abroad, serving as an observer in Ghana’s electoral process in December 2008 general elections and helping draft the Charter of the Peace Conference of Youth organized by JCI Osaka in Osaka, Japan, 2010.

At University he held a number of student leadership positions; in his Hall of residence and in the Students’ Representative Council. During Ghana’s election in December 2008, he had the rare opportunity to appreciate the sensitive nature of elections and also came closer to the plight of his fellow Ghanaian citizens living in the localities when he volunteered as a member of the Ghanaian Students’ Union Observer Mission. This has increased his resolve to help improve the situation of the less privileged in our society and to become a youth advocate for peaceful elections everywhere in the world.

He has on several occasions, been invited by the counseling Department of his Alma mater, Accra Academy, to speak to freshmen about academic as well as global issues such as the Millennium Development Goals and on one of these occasions led these students to make commitments to support the “STAND UP against Poverty” campaign organized worldwide.

He joins Mr. Kiyo Akasaka, the UN Under-Secretary General for Communications and Public Information, whom he met in Geneva and New York in believing that the youth of today will soon be in the helm of global affairs just and has therefore admonished himself with words from the 14th Dalai Lama whom he met in Osaka, Japan that “youth should be the cause of the change they wish to see in their world”.

As part of his academic work for a degree he worked on the thesis topic: “The estimation of Foetal Haemoglobin and Full Blood Count among patients of the University of Cape Coast Hospital” He also recently completed a short online course on ‘Youth and the MDGs’ run by the UNFPA, Youth Action for Change and Youth Dividend. With his zeal for humanitarian work, he hopes to have finished postgraduate studies in health development and moved in to work with a humanitarian NGO or the United Nations. With this achievement he aims to set-up an educational fund and institute to service underprivileged youth back in his country (Ghana). He has special interest in the United Nations and the health-related MDGs and is committed to working towards these goals through the organisation of Model United Nations Conferences and community projects. He aims at becoming a Health Development expert.

His interest in participating in this IIGL program stems from his aim of developing his leadership potential and creating a helpful developmental network. Aside all the above, Dennis spends free time engaging in sports (Badminton). He believes in the possibility of creating a better world for all.

As A Man Thinketh
Jonathan Livingston Seagull
Keys to Success
Psycho-cybernetics
Success Throught Positive Menta Attitude
How To Win Friends & Influence People
The New Dynamics of Winning
How To Win Friends and Influence People
Real Magic
Giant Steps
Nonviolent Communication
Seven Habits of Highly Effective People
Maximum Achievement
Unlimited Power
Leadership for Dummies
Goals
The Law of Attraction
Raising Children Compassionately
Be a People Person
Difficult Conversations: How to Discuss What Matters
Interventions: A Life in War and Peace
The Parliament of Man: The Past, Present and Future of the United Nations
Conflict Analysis
You Just Don’t Understand: Men and Women in Conversation
Messi; The Inside Story of a Boy who became a Legend
Mediation: Skills and Strategies; A Practical Guide
Strengths Based Leadership: Great Leaders, Teams and Why People Follow