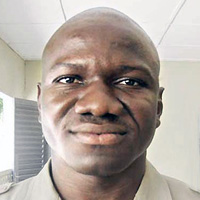 Please describe your vision of a world that works for everyone.
The ideal world for me is a world of justice, equality and peace. It is almost impossible, but I like to say it is almost possible. To get it, we should get minimum vital for all, then education for all. The best world is the one with everybody one the same step or level, but a world assuring dignity for all.

What do you see as the most pressing problems facing the world today?
The world today is facing several problems, there is a link between those problems and poverty and exclusion. More the hole between rich and poor is big; more we will live in insecurity, instability and extremism. Extremist recruitment reserves are hopeless people. The man or woman who knows that tomorrow will be better cannot go through certain behaviors. Another form of exclusion is the fact for some countries to close theirs gates or frontiers to others. Instead of that, I propose to answer the question, why people are coming. If we create conditions for them to work on place, they will stay at home. I don’t know a man or woman who doesn’t like his or her family or home land.

How do you feel these problems could best be solved?
We should start to know each other, to live in a good international environment, it is mandatory for me to know my neighboring problems. As I said, the world is a big village, when the neighbor’s home is burning, you should not say that’s not your problem. After assessing, the problems should be discussed to find consensual solutions. I cannot, according to my position, impose my solution for your problem. To solve our problems, we should be more attentive to others instead of rejecting them. Our vision must tend to overall and not individual or personal. If there is a clash somewhere, it should be a concern for everyone wherever you are.

Profile
My name is Issa Ousmane COULIBALY, I’m Major a military and my rank is. In five months, I will be 38 years old. I’m married since 2003, we have two sons. I joined the military when I was 13 years old, after a test to go the secondary school. Six years later, after Baccalaureate, a diploma in Languages and Literature, I went to the National Administration University. From there I was graduated in 2007 for a Masters in Law studies. From 1999 to 2000, I attended the basic officer school to get the rank of Lieutenant. After commanding an Infantry Company, I came back to studies and attended Magistrate Institute for two years. As travelling experience, I spent one year in Gabon for the senior staff college. There, I visited: Cameroon, Republic of Central Africa and France. After an African Union test, I spent one year in Darfur as Military Observer from November 2006 to November 2007. By the way, I spent two weeks in Addis Ababa for induction course. It’s my best international experience up to now. I met other people and got work and cultural experiences. In Darfur, the security situation was unpredictable; even we lost one colleague there. I’m proud of that hard mission because we helped other African there. I realized that life and death are very close. From my return, I work in Ministry of Defense as staff officer. I’m working in the Military Cooperation Branch; I accomplish some Legal adviser tasks. In 2009 I attended six months English Language Course in Borden, Canada. It was a wonderful experience; I encountered other manners, virtues and style of life. I am fond of Western or Cowboys and trial movies. I like soccer and I am a fan of Barcelona and Marseille. I enjoy sharing my events with other people and I have a lot of friends. I like reading about geopolitics and international law. I want to be one day a good leader not for my country but for Africa, my dream is an emerged Africa without disasters we know today. In my opinion, Africa doesn’t need all these ethnic and tribal wars. The continent is rich, populations deserve better life. But if you pronounce the word Africa, the picture is: hungry, aids, poverty; nothing positive. This is what we have to change; we will do it because I know that we can. Last but not least, I hate lying.