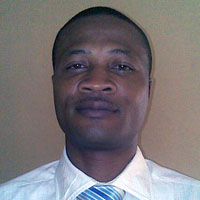 How did you hear about the Institute for Global Leadership?

I have always measured success by knowledge acquired, personality, and associates, the road to success is not very far in the horizon. Through this i intend to move closer to my dreams

Please describe your vision of a world that works for everyone:

I foresee a world where every man will tolerate each, eliminating greed and because god has deposited in every soul, the seed of a great future, but that seed will never germinate, much less grow to maturity, except through the rendering of useful

Service to his fellow man..

It is a complicated world, with complicated problems. But the underlying root of the problems is actually pretty simple. It’s overpopulation – an environmental issue that isn’t talked about nearly as much as it should be. It took all of human history up to about 1860 for the world population to reach one billion. Then it took about 150 years to get the figure doubled. Then it took another 30years to double it again. The sixth billion of human population arrived in only ten years, and the seventh will come even faster. Even as We don’t have to also tell you that we’re in the middle of a climate crisis. Or that HIV/AIDS still claims far too many lives. You’re already acutely aware of these realities.

But you may be surprised by what you DON’T know about some of today’s most pressing challenges, such as National Debts, Global Warming, Poverty, Education, war, Financial mess such as inflation, credit expansion, asset bubbles, Sustainable energy ,legalization of marijuana, illegal immigration and etc..

In summary of the problems, I have thus named it as insecurity; when you relate it to food, shelter and environment, when animal populations increase beyond the carrying capacity of their environment, natural controls take over, primarily in the form of disease and starvation. Natural population controls like disease, flooding, famine, earthquakes and wars worked for a time with people, too, but tend to be harsh and frightening, and we devote tremendous energy to conquering them. But we aren’t successful at replacing traditional population controls with better techniques, the likes of birth control.

we the occupants of the world are mere caretakers of this world, we should really start behaving like a caretaker would really do to a house under his care, our environment has to be given the utmost care, thereby Conscientizing everybody about the dangers inherent. I also strongly think that we should pay more attention to birth control so that we would not come to that stage were humans will outnumber the resources available, I summarised everything on one single word, LOVE; the world should learn to accommodate one and another, if this is four lettered word is applied, most of the social vices which are threatening our very existence will be put to rest; just like the ten commandment was crystallized on one chief word- LOVE- which say love your neighbour as yourself,- if you love your neighbour there will be not greed, crime, political manipulations which leads to war and most of all insecurity. It’s not too late to start now.

Profile
Okolie-Alfred Cosmas, Ikenna is first and foremost a unique person, from DELTA STATE, in the south-south part of Nigeria, known as the Niger-Delta, born on the 11th December to Mr. and Dr.(Mrs.) Raymond O. A Banwuna, a graduate of Petroleum Engineering, of the University of Benin, astute and highly analytical, I aspire to be a senator in future, an opportunity I will take to touch lives in a wide Society, I love travelling a lot, having visited almost 20 states of the 36 states in Nigeria and some African countries such as Ghana, Benin Republic and Ivory Coast, as a result I am multilingual, I love leadership programs and positions which resulted in my holding key positions in various student bodies while in school, such as member of congress (Chief Whip, Deputy chairman Welfare Committee) NUESA (Nigerian Universities Engineering Student Association), member of Parliament (welfare committee, SUG) welfare director (student union Government) I love GOD and try to be simple and Honest in all I do. I welcome any opportunity to serve my fellow man which has endeared me to my friends, I love soccer, athletics, volley ball, swimming etc. when am not doing any of the said hobbies, I am either reading a novel(Fictions, Adventures) or watching movies, any movie or novel that builds my creative imagination gets my nod…. Cosmas ROCN (Resident Ordinary Citizen of Nigeria)