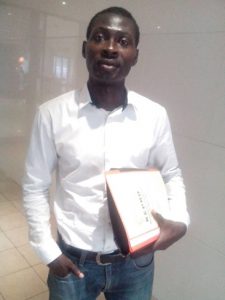 A world that works for everyone is a world where everyone irrespective of their race, color, creed, age, gender, educational and social status are given equal opportunity to build themselves into well balanced personality to contribute to the development of their society and the rest of the world. I believe we should build and have a world that develops thinkers and innovators who will be able turn around problems and misfortunes into life sustainable for all of us.

The world is plagued with overwhelming problems, but the most pressing among them in the most part of world today is poverty .Poverty over several centuries has been a greatest challenge ravaging human race and making people, especially majority of those in the third world countries vulnerable. Majority of People in the world today live under one dollar a day and this has made it highly impossible to meet basic needs for meaningful life. Another problem facing the world today is lack of availability and accessibility to quality healthcare which as a result is cutting short live expectancy of people, particularly those in the third world countries. In addition to those aforementioned problems, lack of education and climate Change also continues to wreck havoc to humanity culminate to food shortage. Terrorism is also a serious problem world over.

There is widely held view that a problem identified is a problem half solved .I believe every problem has its root cause and so once a genuine and sincere attempt is made to confront the problem the likelihood to nib it in the bud is totally guaranteed. These pressing world problems actually need concerted efforts to tackle it headlong with a view of equipping all players with prerequisite tools, attitude and aptitude. This means, every member of society, particularly vulnerable people who are very much directly affected by the problem should be made to understand that they are integral part of the process in tackling the problems so that it will not be a concern of only the policy makers, political and for that matter the government in finding solution to the problems.

I, Alex Ababio am a human right journalist and social justice entrepreneur who has practiced journalism for the past seven years and has earned a Graduate Diploma in Management Studies from Institute of Commercial Management, ICM, England. I have also studied for Diploma in Commerce with University of Cape Coast in Ghana. I have journalism certifications from ICM, England, Journalism Skills for Engaged Citizens from the University of Melbourne through Cousera, Media and Information Literacy and Intercultural Dialogue from UNESCO and Athabasca University and General News Reporting from Thomson Reuters foundation. In 2008, I took a three month intensive training in Radio Techniques and General Professional course with the Ghana Broadcasting Corporation (GBC). I worked in print, electronic and online media and has vast experience in news reporting, broadcasting, editing, script writing and researching. He was appointed at Nkosuo Radio 95.3 in Kumasi, as a news editor in 2008. A year later, I took a position of operation and program manager in the same media house.

All this while, I demonstrated growing expertise in English news casting and became a news anchor and a morning show host. Between 2010 and 2011, he contributed to Ghanaian Observer newspaper as the Ashanti Regional correspondent. In 2013 I took this current position at Ghanaian Watch as Managing Editor. As President of Journalists for Human Right Forum, I visited several police stations in Ashanti region to find out how suspects were treated. In this regard, I took personal interest in investigating several cases to find out whether or not suspects charged with crimes were made to receive justice. As President of Journalists for Human Right Forum he led a group of journalists to undertake several clean up exercise in Kumasi, the capital city of Ashanti region in Ghana.

I am a Human Rights entrepreneur and social justices activist who is so passionate in providing legal assistance with no cost to the vulnerable people in poor communities whose fundamental rights are infringed upon.

I am a hard working, straightforward and committed to work duties. I am extremely motivated person who is result oriented. I have the qualities that allow without difficulty to adapt to different environments. I am flexible and willing to learn new things. I have tremendous experience in advocacy, activism, and social entrepreneurship with a vision to provide opportunity for the downtrodden in the society to live a meaningful life. I am a team player and learns quickly. I am someone who is confident in my judgment and always takes informed decisions to benefit others. I try to learn new set of skills and enhanced on my capacity to deliver positive results. I am someone who takes every opportunity to build professional development experience including building moral values and principles such as humility, honesty, Integrity, accountability, tolerance and respect for others. I love sports especially football and likes reading during leisure time.