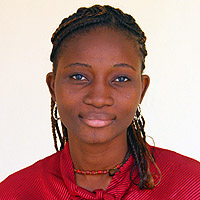 The world that works for everyone must be the one where all leaders have good and exemplary ways of living. A World where both old and young are going to be held responsible for any actions committed either as a public figure holding a public office or in a private firm, or any organisation for that matter. A world of self discipline.

One of the major problems facing the world today is terrorism which I believe stemmed from the act of indiscipline from different leadership angles. If all leaders are doing the right thing at the right time, and not being selfish. Another major problem is corruption which cropped of also from bad leadership. Corruption is fast becoming a norm in many developing countries in the world today, mainly because the people involved are the leaders and those in prominent positions. Corruption can be abated when the leaders are carefully chosen, if the common
people are not allowed to have a say in who is elected. Corruption have eaten deep into the church, schools, companies foreign or local, while government bodies and agencies are the chief corrupt agents. It is expedient to note also, that poverty is a menace threatening nations too. This to a large extent is leading to another bigger world problem called chid-trafficking abuse. The end product of any form of poverty is abuse because an average human being would like to live comfortably, not minding how and whose ox is gored.

Like i mentioned earlier, when election (democracy is free and fair) good leaders emerge who are expected to be leading the people with good character and accountability to the masses. Another way is the establishment of laws and regulations that is binding on all citizens of a country either in power, position or not.

Most the problems can be solved if the government of the nation involved take strategic steps to stop poverty by all means, this would give no reason for anyone to do anything that can lead to abuse, corruption, trafficking and any other vice of a society.

My Profile
Akinwale Evelyn Tolu means different person to different people. To my Family, Am known to be a gentle, caring and understanding child who desire so much for all my siblings to be a graduate so they can stand on their own.

To my school mates, Am known to be an intelligent student leader who lead class groups and assignments. In fact, most students would like to be part of my group because they were sure of good grades.

To my Church, am a worship leader. To my friends, am a goal getter who leaves no stone unturned to get a project completed. To my colleagues, am a team leveler and leader who motivates others to achieve the impossible within specified time. To my Boss, am a hard worker who sit glued in the office until an assignment is carried out to satisfaction of the vision and goal of my organisation.