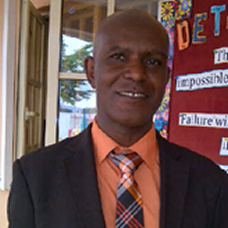 I see a world where human beings are more human by education and consequently living in one accord without any animosity. A World, where peace, justice and equality begin. A world where everybody is his or her brother’s and sister’s keeper by the demonstration of true love, A world in which everybody cares for one another. A world that like minds work to ensure that suffering, lack and deprivation are all eliminated. A world that has no marks of discrimination but a big global family of enlightened beings. I see a world where leaders are selfless and ready to lead people by educating them rather than ruling or lording over them. Just to exploit them.

The world faces numerous problems today, among which are insecurity caused by intolerance, misunderstanding, misinformation and man’s wickedness, greed and selfishness without regard to the sanity of life. the suicide bombings and wars have made everywhere unsafe in this world.

There is also hunger and starvation caused by the exploitation of man by man, oppression and the dearth of people willing to go back to the land to farm. In addition poverty is staring at the faces of many because of the insecurity and the rather harsh economic measures all over the world. These coupled with the craze for money have compelled many to look for short cuts to acquire wealth. Education seems to be ineffective as the educational systems are bastardized and people are not ready to read. Furthermore, people seem to be rather lazy and want to just reap where they never sowed or rather they expect manna to continue to fall from the sky. Others expect miracles as they are religious pretenders. I also believe that religion has now been commercialized by the spiritual leaders, many of whom are bent on only milking the masses by rather confusing doctrines and teachings. Sicknesses and diseases are also staring at humanity. these are the cause of poor dieting, ignorance and deceit. The so called pharmaceutical companies are not curing diseases but rather managing them so as to extort money from the sick just as the food and nutrition companies producing genetic junks which are injurious to health. in addition the environment is being polluted by various human activities, not forgetting the various natural disasters which have been devastating several places on the globe. government policies are also contributing to the impoverishment of the masses. many lack the basic necessities of life while only a few live in affluence.

All the above stated problems can be solved or eradicated by the right education and leadership. People need to be taught to be more human so that all will appreciate life and be enlightened. People need to understand that we are all one big family of humanity, regardless of the race, nationality, sex and what have you. This sort of education should be from educators or planners with the world at heart. in this vein, there is the need for charismatic leaders who will have the vision and the will power to work selflessly and for the world. We need leaders who will lead exemplary lives for others to follow. Such leaders need to learn from those who once walked upon this earth by reading and studying the documented literature on the past leaders. This can be done by such organizations as the IIGL. There is the urgent need for more of such organizations and even the involvement of governments. The world needs leaders in all spheres of life to lead and teach the people. The majority of humanity is just ignorant or has been misinformed, while others are disillusioned and have thereby lost faith and hope in life. Religion needs to be redefined for the truth to be revealed as only the truth can set people free.

The second born in a polygamous family of mixed blood, I, Rexford Jimi Aremu Ajeigbe, was delivered of my mother, the first wife of my father, some fifty-five years ago, precisely at night on the 18th day of September, 1960 in a small village in the Eastern Region of Ghana called Osiem. In fact, history has it that my late grandfather, a native of Iseyin, a town in Oyo State in the Western part of Nigeria immigrated to Ghana on foot and founded the village of Osiem. No wonder, he was known as Asasewura, meaning the Landowner till his death there in 1974.

The family of Tijani, my grandfather who became a converted and devout Muslim because of his association with the Hausa traders of that time, was greatly respected and his son, my father, Mr. Samuel Maxwell Jimah Ajeigbe happened to be among the early few University graduates from that village of Osiem. It is on record that my Aunty, Donkor Habiba, had the most memorable wedding ceremony in Osiem, when she got married to a Yoruba Muslim from Iseyin, who was a big merchant in Cape Coast, Ghana. In such a family with both Christians and Muslims, I was born and given the best of western education. I never got to know my father as a Christian or a Muslim. Instead, I saw him as a Theosophist who believed that it is good to be good to all the people around you. He never discriminated and was down to earth spiritually developed. However, it was strange that he could not reconcile with my mum, a Christian of a royal blood, when they got separated, rather, he got married to another woman, who was rather hostile to my two brothers and me. May her soul rest in peace as it is not quite good to speak ill of the dead. I was very young at that time and that really affected my upbringing in such a way that I thought my mother was at fault and decided not to see her again. It therefore took me over three decades to amend fences with my mother, who chose to remain single till death, a decision that has endeared her to me.

I went through a lot and my attitudes and behavior were conditioned mainly by the experiences in my immediate and extended family. My father was usually at loggerheads with his three sisters and the only brother of his. The infighting affected all the children in the family as we were not free to be together in one house. Nevertheless, my immediate two brothers and I were known for our good academic performance right through our primary and secondary schools. I had a unique privilege to study in the United States of America, Florida precisely but was deported. I later had the opportunity to visit Germany and Spain but could not make any meaningful gains in those places. I had to settle in Kano, Nigeria, where I eventually started my family by getting married in 1997. I had previously been in a relationship with one, Susie in Ghana, who took in and gave birth to a set of twins who could not survive in 1979.

I am happily married with three wonderful children, a girl and two boys. My appetite for reading knows no bounds. I am a voracious reader and an ardent student in search of the truth and peace. Among the books read by me are Theosophical books and manuals authored by Madame Helen Blavastky, Purucker and a host of them. I have digested books by Lobsang Tuesday Rampa, King George, James Hadley Chase, Vincent Norman Peale, Bill Newman, Joel Osten, Oral Roberts, Ben Carson, Mike Murdoch, Oyedepo and E.A Adeboye among several on varied subjects. The list is endless. The quest for knowledge has led me to delving into various fields of study including Metaphysics, Numerology, Kabbalah and the Tarot card reading. In fact I am not just religious, a Christian for that but a Theosophist who believes that the world can be made a better place if only people know themselves by being enlightened. I love travelling, playing chess, soccer, hockey and table tennis in addition to reading. I also love good music; jazz, blues, reggae among others but ironically I do not have a nice voice to sing. In fact I claim to have a toad in my throat.

It was my burning desire to teach the teeming youth the truth about existence that compelled me to take up teaching, though my ambition was to be a doctor or an inventor of artificial blood. Without any regrets, I have understood that the blood is synonymous with lifesaving or rather the need to educate people to become more human, I consequently deem it very essential to impart only relevant knowledge and ensure that my pupils really grasp what they learn. My years of existence on planet Earth have exposed me to various experiences that make me yearn to render my best to humanity by making the world a better place for all. I play chess, table tennis and hockey as pastimes but most times I read widely on virtually all subjects. I love motivating others by teaching and preaching. I enjoy discussing various current issues on all aspects of life. I am a good problem solver and hope to achieve more by more study in order to stamp my feet in the annals of history when I am gone. I yearn to be a prolific writer before passing on. As a member of the Redeemed Christian Church, I had to undergo training in the Believers’ class and the School of Disciples (SOD) and became a worker and presently a Minister, a Sunday School teacher, Coordinator of my Area House fellowship Department. Furthermore, I handle the baptismal class and I am the Church Secretary of my Parish. I enrolled in the Bible College and obtained a Post Graduate Diploma in 2011 but I have opted out of ordination all these years. My desire is not for titles but to be of service to God by serving humanity and to live in holiness and righteousness which in essence is to be of love and assistance to all and sundry.

As A Man Thinketh
Jonathan Livingston Seagull
Keys to Success
PsychoCybernetics
Real Magic
Giant Steps
How to Win Friends and Influence People in the Digital Age
Success through a Positive Mental Attitude
The New Dynamics of Winning
Goals
Nonviolent Communication
Goal Setting 101
Leadership for Dummies
The Law of Attraction
The 7 Habits of Highly Effective People
This Child will be Great
Unlimited Power
A Long Walk to Freedom: An Autobiography of Nelson Mandela.
The New One Minute Manager
The Magic of Believing
John Kennedy, Death of the President, The History Hour
Kwame Nkrumah, The Father of African Nationalism
Showing Up for Life, thoughts on the gifts of a lifetime by Bill Gates Sr.
The Leadership Pill
Goal Mapping
Creating your path through leadership