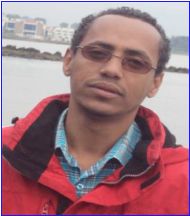 I believe that the world we live in are full of contrasts/ goods and evils/. So would like to contribute to balance to good side of the world for the next generation to live in peaceful, prosperous and in a fair relationship with out discrimination and injustice. As an old adage “The Bigger fish must not swallow the smaller one”. While rather than competition I want to see everybody should cooperates each other for a better future”

Our world nowadays faces grave problems like famine and disaster due to climate change, fear to nuclear war, critical economic crises which widely swap Western hemisphere as well as overexploitation of natural resources which is emanated from greedy completion among countries. Another problem is abuse of fundamental human rights by dictator regimes as well as by religious extremists in the Eastern hemisphere. So that our earth needs enlighten people like me to address and solve such problems.

Human mind creates and destroys the world since the beginning of creation. So that we have to work on human mind to change and transform his/ her attitude. In this uncertain world, there are two constants that is change and conflict that contributed for the major problems mentioned above. The Great Walls of China , The Tajmahal in India , The Hifel Tower in Paris , The Liberty of the USA , The Axum Obelisk and Lalibela Rock hewn churches in Ethiopia and The Victory of Adwa in Ethiopia which was fought and won the Italian Colonizers that ensure The equality of Blacks and Whites and the like were created by likeminded leaders. Whereas great catastrophes were designed for the earth we live by dark minded leaders like Hitler in Europe and Africa (Egypt), The Rwandan Genocide, The Nuclear Armament Race, The Unfair World Trade Relationship that impoverished Africa which supply most of world’s Raw materials supply, Some African Dictators that slaughter there people and the like.

Hence the world had abundant resources to accommodate billions of dwellers in the future. But the human mind if not altered through positive thinking would destroy the earth and its human beings. As the old adage says “Know Thyself”, we have to create leaders that are consciously aware, highly-integrated and heart-centered.

With respect to my personal interests, I like reading books and magazines most of my time and also discussion with friends and family on life. My second favorite is watching movies. I have a dream one day to be a civil rights leader in my country and to contribute for the freedom of citizens rights. I have frequent travels and acquaintances most of Ethiopia’s boundaries and I have also seen historical places, while I don’t have traveling experience to abroad. My favorite books are that of psychological and leadership enhancing skills and from movies I like to watch adventures and scientific films.

I have been participated in designing many non profit project proposals for civil societies and community based organizations. I have also experience in designing investment projects especially in agricultural and manufacturing sector and introduction of cash crops for international markets. Most of my job leadership experience is that of managerial and needs decision making, planning and monitoring of projects.

With respect to family, I am married and have a three year old son. I am an Orthodox Coptic Christianity believer and I attend weekly courses on How to live a Christian Life.