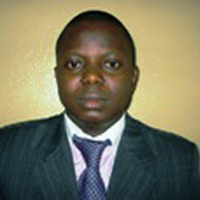 What do you see as the most pressing problems facing the world today?
The most pressing problem among many others that faces the world today is the problem of security. The world is becoming unsafe for many, especially in the face of the insurmountable terrorist attacks and natural disasters of all sorts in a sequel of greater magnitude. Morality is on the decline, men are becoming beastly in nature and character, thus making the world unbearable. The ripple effect of these is untold on almost everyone, not mentioning the current torrential global economic crisis. What is the world becoming? If the devouring trend of global warming continues, what will be the future of the human race? Answers to these questions are critically urgent. The world is in crisis.

How do you feel these problems could best be solved?
Leadership is everything. Deliberate leaders, taking the initiative to transform the mental faculty of men will make a whole different in every society. Behavioral and attitudinal change by mind changing mechanism through the instrumentality of key players and role models in society as IIGL is doing will make all the different in the world. For instance, when the terrorist is positively influenced and come to the realization that there is more to life than carrying out suicidal bombing raid and other terroristic acts, he will cease to be a threat to anyone and he will begin to see things and people in a different perspective. Think of it, if each and every ill behaviorist, demented people, unscrupulous, rapist, terrorist, environmental polutionist, racist, killers, and many more, come to this realization, be sure the world will be a better place.

Profile
I am a native of Sierra Leone, a small coastal country with an area of 71,740 sq/km, between Guinea and Liberia in the west coast of Africa. I was born in Freetown to Mr. William Small on 2nd December 1971. I grew up to be a quiet man, full of ambitions, but with few success stories due to my poverty stricken background. With a good sense of humor, I always wants to get it right. I am married to a lovely wife and have a beautiful daughter. Being robbed of my childhood days, I grew up with a deep social dent. Anything with extreme social flavor makes no demand on me. Should I say I am conservative? Certainly I will be only describing myself in a sentence. Decency and straightforwardness will be the most appropriate way to say about my personality.

Certainly I lived my life heedlessly in a pigheaded manner. I was born into a very poor and scattered family of African standard and was strictly raised in a loose setting all by MY father and guardians, thus making me prone to all kinds of abuses because my father was a womanizer. I however managed to learn a disciplined life due to the inner hurts I bore in my childhood. For thus is also my approach to life. My parents sent me to school and I attained to tertiary level with double bachelor degrees in Theology and Administration and will soon complete my Masters Degree in Business Administration. I was lost in the cocoon of self pity though I considered myself very modest and morally upright. Being from a very humble background, I was very naïve to the fads and tides of my youthful days. I was a potential scholar, yet lacked the slightest glimpse of who would lead me on unto achieving that as I had no parenting care. I was marred with neglect, as my father cared only for his numerous play mates. I did not give up however and was determine to push no matter how slow and difficult, and ever since I have been moving on, although slow and hard, but confident of the end which is no doubt fulfilling.

As a person, I am interesting in reading, and my goal is to be serviceable to humanity in whatever capacity I can. I have been to few countries and to name a few, Guinea, Ghana, Nigeria, and Italy. My favorite reading is on religious issues and current affairs issues. I have served as a missionary and also engaged in different agricultural and community developmental projects. I am fond of adventurous movies and anything adventurous.

Words are the product of the mind, and they are the channel through which great ideas travel. The ability to convert such words into writing prepares the platform for great learning that lead to great success and the developing of great minds. Education has been my dream because I believe that a man can only make his way to the top in his society if he is educated; and that education is a process of learning to the developing of one’s mind, which will ultimately gives him the opportunity and capability to reach a wider audience. With education, I believe that the articulating of matter can be done in a more analytical way. Thus, my philosophical conception on this is that “Books make great minds, great minds make great people, and great people shape and determine the courses of event all around them.” The pace is dictated by them as they lead and others follow. National, international, personal, economical, technological, and infrastructural development and advancement would never have been possible if not for education. To me therefore, education is optimal to growth, development, and advancement and up-building.