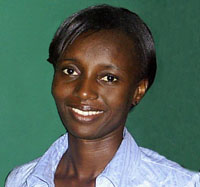 A world of peace, love and adequate justice for all, irrespective of one’s income, class or race – where there might not necessarily be equity, but none suffers hunger, homelessness and oppression: a world which could have the rich and the poor, the white and the black but with none deprived, at least of the basics of life and where each child has all the opportunities to hope for a better tomorrow without having to be abused first. This summarises my vision of a world that works for everyone.

Wickedness and absence of true love in our world today is one of the most pressing problems of today’s world. For lack of love for one another and wickedness we hurt each other without remorse, there is so much mistrust and misunderstanding and we kill each other with indifference. These have made us so selfish to our marrows, to the extent that we don’t even mind harming our own blood provided it is not us. These have brought with them increases in vices such as uncontrollable quest for power, power drunkeness and corruption; and for these man would go to any extent (be it wars, massacres, genocides etc) without a second’s thought for humanity.

Another pressing problem is the issue of extreme poverty which reduces humans to nothing. It has left thousands starving, unsheltered and diseased with no one to look up to for support. It is that which creates room for discrimination, oppression and suppression of the vulnerable. It sets the platform for injustice which usually affects the masses.

The last most pressing problem facing our world today in my view is poor leadership which has often left nations in a state of a development lag and this is especially common for the African continent.

The world should revisit the anals of yesteryears to bring back that which made the people of those days less wicked. There is the need for more moral education to inculcate in us all, values and morals that emphasises the need to be more responsible for one another for the betterment of humanity.

There should be a multidisciplinary approach to improving the quality of life of all. Governments and institutions should put in place policies that would aid in promoting quality of life while making standards of living affordable to all. These policies should support the labour force in especially meeting their basic needs of life.

Lastly states and institutions should invest in the training of leaders especially those of political institutions. This would ensure that these leaders are better groomed (ethically and administratively) and not half baked to facilitate national and world development.

Profile
I am a female and a Ghanaian from Elmina in the Central region of Ghana, but currently resides in Kumasi. Upon graduating from the University of Cape Coast (UCC) on October 10, 2009, after a 6 year study, I am currently an optometry intern at the St. Michael’s Hospital in Pramso in the Bosomtwe Atwima Kwanwoma district of the Ashanti region of Ghana.

I am slim and tall in stature. I am chocolatey in colour with a permed black hair. I have an oval face with dark brown eyes, pointed nose and well curved lips. I am a happy, easy going extrovert with a high sense of optimism, a good sense of humour and a strong determination to succeed. I come from a family of six; both parents, three ladies and one gentleman, and I am the third of the four children.

My interests are learning, going on sight seeing, peer education, listening to the news and recently politics. I am quite articulate and enjoy talking so usually acts as Mistress of Ceremonies for functions. Though reading of story books is not particularly a hobby for me, my favourite novels are Pandora’s clock, the Pride and the Prejudice and the Archangel 006. My favorite movies are Troy, Count of Monte Cristo, Rules of Engagement, Sarafina, Why did I get Married and Men versus Women. I also enjoy playing computer and phone games.

While in the University I was one of the founding members of the HIV\AIDS Prevention and Campaign society of the Pax Romana, UCC local and continued as an active member throughout my stay on campus. This society aimed at promoting a high sense of morality among the youth of Cape Coast and Central region as a way to curb the HIV/AIDS menace. More often, I served as a facilitator for our programmes. I proposed and worked out a modality for contributing towards the welfare of the Central regional HIV\AIDS unit of the Central regional hospital. This was done by way of a semesterly donation to the unit. As the adage goes, charity begins at home, and this was made practical by our group when we proposed and established the decent dressing award for females in the Pax Romana, UCC local; this was aimed at promoting modesty among the ladies of the church within the University campus.

As a member of the Optometry Student’s Association of Ghana, (OSAG) UCC local we undertook a number of out reach programmes aimed at promoting eye and visual health.

I have held a number of offices in different groups at different times – secretary and vice chairperson (two consecutive times) within the HIV\AIDS prevention and campaign committee (2004, 2005 – 2007): Chairperson of the decnt dressing committee for two consecutive times, also during the same period: Women’s Commissioner, (NUGS – UCC local), University of Cape Coast (2007 – 2008): and in various capacities at church and on a number of committees.

My goals are numerous in this life, some short term and others long term. One of which I dream and work so fervently to achieve, is to be in one of the high offices of the United Nations one day. I dream of owning an NGO that serves the needs of adolescents from poor families and a University that offers only two streams of programmes, namely health sciences (medecine, optometry, nursing, pharmacy, radiology and medical laboratory technicians) and leadership training (at all levels of leadership).