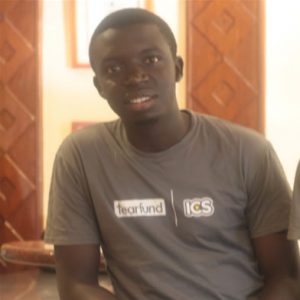 My vision of a world that works for every one is a world which all people has at least studied basic years of school, a world to which people understand things in the way that will never cause any harm to them.

The most pressing problems are, unemployment, I am not sure how other countries are facing this problem but in my country it is the most serious issue because many people are seeking for jobs that they know they will never get, all days they dream, they do not want to lose hope and me I am among them, something is out there-they say, but there is nothing, the most number of unemployed people is youth and once they are unemployed they tend to find other ways for life which are bad for their lives like prostitution, drug abuse, robbery…terrorism Etc., and another range of unemployed people are people who are above 50 years old, for them they still need to work in order to survive but many companies and institutions do not want them, they replace them with younger people, yet those people have other young people to take care of. It is a hard thing, I don’t know It might be good for businesses or to the government but not good for many families in the country, my father used to say that may be old people are being killed or sold because they are not seen anywhere in many organizations.

I think the government should implement new policies about this issue, like at least create the way for someone who will lose his job in his 50s, an opportunity to get something which will support him/her in that age, find a way for young people who do not have jobs an opportunity to get more jobs to change their lives. Teach young people that even though jobs have been limited, that they could create their own and be supported.

I was born in 1990 and grew up in a small city of Muhanga, in a family of five children I am the third born three boys and two girls. Ever since I was young I showed different perspective personalities which would differentiate me with others, like the fact that I never played other boys games, I was always quite, writing infinity of things (used to call them movies), sometimes I would think that I was weak or sick, that I was no one, that I should hate myself and sometimes I would feel sorry for me, but as I grew up, I realized that being different won’t kill me, all I had to do was to learn how to live with myself, I did all my studies in that condition and all the time while others would be playing, me I would be writing, finally those infinity things that I used to write came to have senses, I would write songs, poems and books, which I still write now but I haven’t publish any of my art.

I did accounting in high school, but I never felt like it was my favorite thing to do, I always loved to be an artist, and a writer, which I still believe in for now, I am a song writer, and most of them are in English, I am planning to start singing shortly, my songs are humanitarian songs, where I sing for change, I have finished two books which are laying in my wall drop and I have hope that one day they will be read by someone.

After high school I continued University in India where I followed commerce, I was still trapped in accounting thing but that didn’t stop my talent, when I was in India that’s when I came to realize that I definitely have talent that I should improve it in the way that I should expect something from it.

Currently I am back to my country, and I have a small paid job which help me to survive, I always loved reading even though sometimes it would be a challenge due my living condition, and I am looking forward to read more of IIGL books and be someone important to my community. I recently volunteered in a program called ICS (International Citizen Service) to which we: In country volunteers were living and working together with UK volunteers, in this program we were involved in may projects and we did learnt many things as well like development work, our communication skills grew, we came to learn about another culture, and our confidence was definitely and other achievement from it.

There is one proverb that I read from one of your books called, What To Say When you Talk to Yourself which says “I know that what I believe about Myself is What I will become.” So I am.