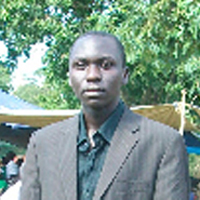 Why would you like to participate in this study program?
A study opportunity with the IIGL would hopefully impart some skills and knowledge necessary to get a better understanding of leadership at all levels and in different circumstances. My personal observation of our current situation, especially in this part of the world indicates a desperate need for quality leadership at all levels of the formal and informal hierarchy. This will be a challenge particularly felt by today’s youth, I’m part of this demographic and seek to rise to this leadership challenge. I desire to enhance my ability to solve the problems we face today and hopefully mitigate those of tomorrow. I believe the IIGL is a platform for the application of vision, foresight, networking and critical analysis. I’d love to be a part of this.

Please describe your vision of a world that works for everyone.
My vision of a world that works for everyone is this, a world I which every single human being on this planet can live his or her life in all it’s fullness. A world in which every individuals’ aspirations, hopes and dreams are achievable in their lifetime, one in which there is a conducive environment for these aims to be achieved. I envision a world in which abject poverty, common diseases and social injustice are confined to history books and the necessary institutional frameworks are in place to maintain that status.

A world where those with influence, power and resources are seriously interested in putting these to use for the greater good of humanity. Where we identify with the poor, powerless, afflicted, oppressed and marginalized, where there is serious concern for children, respect for the dignity of all mankind and our environment and a call to share resources with each other regardless of race, color or creed.

What do you see as the most pressing problems facing the world today?
Two decades after the first internally displaced people’s camps in northern Uganda were set up, people are now returning to the homes they left behind so many years ago. It’s a Herculean task trying to count the physical, emotional, psychological, social and financial cost of the war. In my opinion, the cost has been too high, the toll immense and the burden almost too heavy to bear.

The Lord’s Resistance Army and several other terrorist groups, many of which have international links have wreaked havoc all over the world as a result of extremist ideologies. Extremism is a big challenge. Those with extremist views, in several instances have decided to take it upon themselves to obliterate any opposition to their views, especially through the use of violence. Extremism breeds racism, war, genocide and several other maladies.

Global climate change is another problem that we will be increasingly faced with. The increase in global warming as a result of increased carbon emissions and environmental degradation will increasingly cause the weather to get worse if we don’t do something to mitigate it as soon as possible.

How do you feel these problems could best be solved?
Many of the problems we face today are a result of human activity either directly or indirectly, and that’s an indictment of the decisions we have made in the past and continue to make. I believe our ability to engage with each other, especially with those with whom we have different viewpoints can be enhanced by reframing issues to look for win-win situations at the outset. Whether it’s countering global terrorism or averting environmental disasters, I think we should prioritize the need to win hearts and minds by putting ourselves in other people’s shoes and making decisions only after we have critically considered every angle available.

We can sensitize everyone to gain an appreciation of the sanctity of life, respect for the dignity of every individual, respect for the environment, nature, our cultures, our identity and how to be sensitive to the diverse context in which we express that identity. I feel that a thirst for education, especially amongst the youth is pivotal in the process of solving our problems, however complex they might be. Education results in the empowerment of individuals, communities and nations. Knowledge is power, knowledge is wealth, and the only thing we lose when we gain knowledge is our ignorance.

Profile
I’m the eldest of four children and we are a family of three boys and a girl. We come from a town in Northern Uganda called Lira and are from the Lango tribe. I’m currently a student at the Uganda Martyrs University pursuing a Bachelor’s degree in Business Administration and Management. My interests are reading, traveling and sports. I’m really passionate about reading, I’ve read the works of several luminaries like No longer at ease by Chinua Achebe, Song of Lawino by okot P’Bitek, The end of poverty by Prof. Jeffrey Sachs, From third world to first by Dr. Lee Kwan Yuew and Long walk to freedom by Nelson Mandela, to mention but a few.

My travels have so far taken me to London- England, Juba -Southern Sudan and Nairobi -Kenya.

Sport is also a major part of my life, I’m a football, and athletics fan.

Leadership experience for me has come primarily from the schools I’ve attended so far, I held several positions ranging from class leader to education minister in my final year at college. I’m also a member of the leadership team at Northern Uganda Prison Ministries and I’m also youth representative on the local council.

After the signing of the peace agreement between the Ugandan government and the Lord’s resistance army rebels, I went back to my hometown known as Lira to volunteer in the resettlement exercise that was taking place in the region. It was a big challenge but worth the effort, and the experience I got was immense. I later joined Pathfinder International where I started as a volunteer and moved up to the post of Monitoring and Evaluation project officer at the Northern region office in Lira. While at Pathfinder International, we worked in 14 districts in Northern and Northeastern Uganda, in Reproductive health, Family planning and with Orphans and other Vulnerable children.

On completion of my contract, I teamed up with a few friends to form the Northern Uganda prison Ministries as a fully fledged community based organization (C.B.O). Our mission was to attend to the emotional and physical needs of inmates facing incarceration in prisons within the region. We also follow them up upon their release to help with their re-integration into their communities, by providing some vocational training and tools to start a new life back home.

I recently got involved in a grassroots movement to encourage social entrepreneurship. We have been spreading the message of environmental preservation and conservation. The movement also has a couple of farmer’s groups in which we commit to market our produce together and assist each other in our savings scheme and co-operative society.