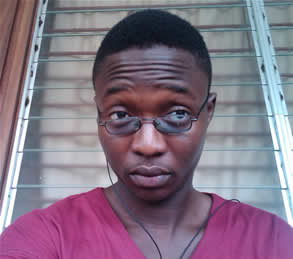 To me, a world that works is a world where everyone is respected. My experience as an undergraduate makes believe that we can have a world where peoples’ differences would be respected.

In school, I loved living on campus as it accorded me the chance to learn from people. Indeed, it was not without some moments of regrets but it was worth it. As a Christian, all through my stay of 4 years on campus, I symbiotically co-existed with Muslim folks. We lived as individuals who understood the religious leanings of one another. We talked on some of the Christian doctrines and that of Islam. Fate brought us together as roommates but we became brothers.

The experience birthed my interest in religion tolerance and made me believe that we can truly have a world where peoples’ religions or some other form of differences will not be a factor for perpetrating evils. A world based on sheer love for humanity. A world of tolerance. A world of love can never be a bleeding world.

We lack love and tolerance in our world! During my first year in the university, a young guy came to my school from a non-English speaking country which is very close to northern Nigeria. He came for a short course in English for Specific Purposes (ESP). Obviously, people in the south-western part of the country have been prejudiced to believe that men and women alike from the country (Niger Republic) are congenitally violent. Based on this erroneous belief, as students studying for a degree in English Language, my classmates chose not to help the guy by not admitting him into group discussions. He faced victimization. All he had around him were folks that had a single story of people from his country. The feeling of hatred was so intense that my standing out to render a helping hand to the guy would, to my classmates, mean I was committing a taboo.

What happened to the guy is typical of what most people encounter on a daily basis.

Our planet is no doubt a beautiful one with over 6 billion people. Nevertheless, despite having different colors; coming from different races, countries, cultures; speaking different languages and proclaiming different religions, our hearts beats as one. This multiplicity also contributes to the beauty of our planet. So, to solve the problems in our world, we need to learn how to respect our differences, tolerate and love one another. Let the rich respect and tolerate the poor, let Muslims tolerate Christians, let love be the centre of our actions. A leader that loves the led will not engage in any corrupt practices. A man that is guided by love will help the poor ghetto kids in turning their dreams to fruition. Love conquers all, let it reign.

I am a listening, motivated, passionate, willing, adaptable and bilingual graduate with enviable organizational, project management, analytical and communication skills developed over the years. Born and raised by middle-class parents in Awe, a small town in Oyo State, Nigeria.

Growing up was a battle like a candle fighting for survival in the wind. Like every other poor Nigerian kid, I walked through the streets of my neighborhood barefooted with my friends myopically admiring the exotic lifestyles of the rich folks. Sadly, most of my friends could not live the dream. They became victims of the many ills in the society before passing out of high school. They lost focus. Needless to say, my childhood experiences are players in the type of life I’m championing. The shattered dreams of my friends who couldn’t stand the test of time are propelling forces in my quest towards lofty heights. Simply put, the social disorders (caused by youths) that now constitute the index of our national life in Nigeria are my motivating factors in being an agent of a world where serenity and sanity reside, a world where the bestial tendencies in man will be cultivated by love, a world where the ghetto kids like me will have equal opportunities with privileged kids, a world where youths will be guided by sincerity of purpose, a world where the pains of the needy will be felt inside the deepest part of our hearts a world that cares. These are my dreams. Who says they are unachievable? For me, making impacts in the lives of just 2 kids that will go ahead and make impact in their respective communities is enough! The Nike® slogan – just do it! – comes handy for me. For me, there is the need to see to the realization of youths that will be guided by the strength of will and foster positive changes in the society. That is the music that stirs my heart, that is the vision I cherish. Many dreams are dying!

As an agent of change, I have had a fair share of leadership roles in the past. I was a weekly columnist at the defunct TouchNaija (www.touchnaija.blogspot.com): Dialogue with my Country. That accorded me the opportunity to reach many people. The column was devoted to the discussion of socio-political happenings in the country. Also, I was the Chairman of the Audit Committee NASELS O.A.U. 2010/11 and 2011/12 Sessions. I headed a 5 man committee that audited the financial records of past executives of the association.

Also, I’m a co-founder and life member of Impact Makers, O.A.U. (2008- present). It was co-founded with the renowned Nigerian capacity builder, Dayo Nigeria. This is a group of young minds from all over the countries. It is a body that is after the total good of all youths in the country by organizing competitions and engaging in round table discussions. As part of our efforts, we also preach cultural, religion and gender tolerance.

Being a linguist, I love creative ventures. My interest in creative endeavors made me a campus journalist for a good number of the national dailies. My articles have been published in The Nation, Nigerian Tribune, Punch, etc. Apparently, to be a good writer, one should be a consuming reader. So, for me, I get my mind illuminated by reading the timeless works of Shakespeare, and some other African writers. Dialogue with my Country by Niyi Osundare is collection of articles on the socio-political happenings in Nigeria that I always find illuminating. Because of my sheer admiration of Niccolo Machiavellis The Prince, I wrote my undergraduate long essay on the “Ideological Projections in Niccolo Machiavellis The Prince.” As a Christian, the Holy Bible is a light to my path. Also, Invictus by William E Henley is a poem that hangs firmly on the wall of my room because of the richness of its themes. In spare times, I love sleeping and I support Manchester United. Also, once in a while, I go to the cinema with friends.