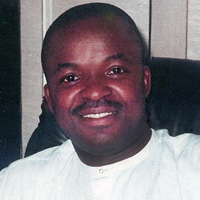 I envision a world where the peoples of Africa, Central America, The Caribbean, and the Far East are emancipated from economic and political shackles. The said shackles unleashed on them by their leaders and multi-national corporations whose interest can be anything but altruistic. I envision a world where developed countries will genuinely assist developing countries to catch up with technological development without strings attached. And my expectations will not be cut off.

1) Terrorism is undoubtedly the most pressing problem facing the world today. It has become so intractable and seemed to have defied every solution recently employed to confront it. The pronounced case of September 11 in the United States of America is still fresh in our memory. There have been also instances of terrorist attacks in Asia, Europe, Africa and the Middle East. It has become a global phenomenon. The covert, clandestine and sophisticated network of the terrorists and their sponsors is still a puzzle to every discerning mind. More shocking is the gullibility and susceptibility of individuals used as vessels for such dastardly acts.

2) Disease/Epidemic is incontrovertibly one of the most pressing problems facing the world today. There have been cases of Acquired Immune Deficiency Syndrome caused by HIV which are known to be pandemic. There has so far not been any curative breakthrough discovery to check the disease. Cases of epidemic such as flu also abound.

4) The upsurge of natural disaster in the world has become so alarming. It is to say the least, an unprecedented burden to humanity. The speed with which it occurs makes it difficult to be controlled. It leaves in its wake woes of unimaginable nature. The cases of Hurricane Katrina in the United States of America, the recent calamities that befell the Haiti and Pakistan peoples are still very fresh in our memory. This poses a big challenge to the world.

How do you feel these problems could best be solved?
I intend to the address my suggestive solutions to the above mentioned problems serially as stated above. They are not by any means exhaustive but personal subjective view.

1) First, to tackle the problem of terrorism requires a subtle and holistic approach. A combative approach may not yield tremendous result as we have witnessed in recent times. It is a fact that the main reasons adduced by the actors in terrorism are religion and subjugation based. An honest and a critical analysis of the issues raised by the perpetrators of terror will reveal that the solution to the problem of terrorism lies in active parenting, propagation of good religious orientation and the eradication of subjugation of people’s inalienable rights from the face of the earth.

It is a truism that young people used as tools or vessels by terrorists and their sponsors are human beings with either parent or parents. So the fight against terrorism should start from the home front. Parents should from the early stage of a child’s development inculcate in the child good moral ethos. A child should at early stage of development know that violence of any sort is condemnable. Active parenting requires that parents should closely monitor their children to ensure that people they associate with are of high moral standing. The Holy Bible says in 1Corinthians 15:33 that, “Bad company corrupts good character.”

Religious leaders have a great role to play in the fight against terrorism. It has been observed that the seed of terrorism is sown in either churches or mosques through misguided utterances of religious leaders. Provocative utterances that tend to undermine one religion or the other should be discouraged. It is amazing to note that the two religious bodies, Islam and Christianity, in the name of which terrorists hide to foment havoc, have as their creed- abhorrence of violence. Adherents of the two religions should be taught that peace is an outstanding tenet of their religions. Therefore practitioners are encouraged to propagate peace.

Injustice of any sort should be extinguished from the face of the earth. Research has shown that subjugated persons or race tend to react in a violent manner as a means of asserting their freedom. Individuals are encouraged in their relationship with one another to exhibit at all material time, profound measure of equity.

2) The scourge of disease, from medical knowledge, is best handled through preventive measures. With this expert information in mind, HIV infection can be controlled through public awareness campaign. The public should be aware of how it can easily be contracted and measures to be taken for its prevention. Adequate fund should be voted by government of each country for this purpose. Also governments and individuals are encouraged to donate to various research groups who are working to ensure that curative drug is discovered.

The leadership of these developing countries should rid themselves of corruption and personal aggrandizement. The citizens of the said countries should on their part embrace good work ethics. Laziness breeds poverty.

4) Natural disaster is not always predictable. However, there are instances where through science some revelations have been made. Efforts therefore should be made to ensure compliance with evacuation of people from an area where warnings have been issued.

Safety emergency management unit should be established in each country. Such outfit should be well funded. It must also be staffed with well trained and efficient personnel.
More importantly, the whole world should show care and love to victims of natural disaster by expeditiously responding to their aids.

Profile
My name is Christopher Okechukwu Anakweze. I was born on October 18, 1964, to Mr. Samuel Anakweze Omutalu and Mrs. Grace Amaka Anakweze (nee Otue). I hail from Awka, Anambra State, Nigeria. I started my primary education in 1972 at St Mary’s primary School, Awka. I completed my primary education in 1977. Thereafter I proceeded to Boys High School Umuawulu/Mbaukwu for my post-primary education. In my third year, I transferred to IGS, Awka where I completed my post primary education in 1982. I gained admission to study law in 1986 at University of Nigeria, Nsukka. I graduated and obtained LLB (Hons.) in 1990. I did my National Youth Service from 1990-1991. I enrolled at the Nigerian Law School in 1991, completed my programme in 1992, and earned a BL. I was called to the BAR and admitted as a Barrister and Solicitor of the Supreme Court of Nigeria in 1992. I have been in private practice with interest in commercial practice. I am happily married to Mrs. Courage Anakweze, an Education Consultant. She obtained a B.A. degree in English Lanuage, from Bendel State University, Nigeria, and a Postgraduate Diploma in Education from the University of Nottingham, United Kingdom. We are blessed with two children, Sharon and Allwell.

It has been my earnest desire to be involved in leadership in my country. It is my aspiration to be engaged in partisan politics and occupy an office that will enable me impact positively on the life of the common man. My interest in partisan politics is also driven by the urge to show practitioners by example, that leadership at all material time should be service oriented. In this regard, the only way this can be achievable is by being an active participant. Being a critic from the sideline, from my observation, cannot suffice.

It is the quest for knowledge with respect to qualitative leadership that drove me to enroll for a degree in Political Science at the University of Nigeria, Nsukka. I am awaiting my result. It is this same drive to learn in order to be sufficiently equipped with sound leadership principles that has brought me in contact with the International Institute for Global Leadership. It is my fervent prayer that I will be admitted into the great institute so that I can learn from the fountain of knowledge of leadership masters.

At the risk of sounding immodest, I have read books, books and books! My preference is for political books and biographies. I don’t have an iota of interest in romance books. I read newspapers a lot. Watching movies has never been part of my programme. I love listening to news. I will love to travel round the world. At the time being I have not made much travel.

It is apposite to recount an experience I had in my earlier years as an ad hoc electoral staff. It was during the election that ushered in the 2nd term of the 2nd republic in Nigeria. I was in charge of the Voters Register at the polling station assigned to me. It was my responsibility to determine fake and genuine voters. Only genuine voters were of course entitled to cast their votes. A highly placed party official, who arranged fake voters so that his party would have a lead in the constituency, got the shocker of his life. He made juicy offers to me in order to compromise my position. These I all rejected. In his very eyes I turned back hundreds of voters that could have enabled him have the anticipated lead.

Then a lasting and rewarding appreciation! One of the party agents who observed that I was forthright in my duty post during the election sought me out to appreciate me after the election. He came to thank me for an upright conduct. To his surprise, I rejected the offer of appreciation. Suddenly, he looked up and tears welled up in his eyes. Then he poured his heart in prayer for me and declared that God will one day make it possible for my kind to be in leadership position in Nigeria. Chief Albert Ndigwe your expectations will not be cut off.

The prayer from Chief Albert Ndigwe, for me, has been a lasting and rewarding appcreciation. It has always kept my dream alive. I am hopeful that my study at the International Institute for Global leadership will quicken my steps in my success journey toward actualizing my dream. And I am ever desirous of giving back to the society good measures of love and care.